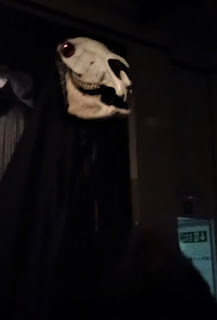 The wonderfully spooky skeletal horse in the photo to the left is an 'Obby 'Oss, normally part of a folk custom in which a pair of such creatures dance through the streets as part of a May Day festival in Padstow, Cornwall. It is similar to the Mari Lwyd skeletal hobby horse that is part of wassailing traditions in South Wales.

The beast in the picture was part of the finale at The Nameless Arte traditional witchcraft conference at Westcliff, on the Essex coast, on Saturday. It was a brilliant day.

The first speaker was Jon Kaneko-James, with a talk called The Books of Anna Taylor: Women and Grimoire Magic. I'd heard Jon talk about Anna Taylor at an ASSAP conference on fairies a few years ago. You can read about that here. Anna Taylor was put on trial for witchcraft in Rye in the early seventeenth century, accused of summoning fairies in order to search for treasure. In his latest talk, Jon considered Anna as an example of women as part of a grimoire tradition, using literate magic in the sixteenth and  seventeenth centuries, like their male counterparts.

​Martin Duffy then spoke on The Sorcerous Cauldron. The cauldron is one of the most familiar accoutrements of witchcraft. Martin looked at artwork depicting witches, focusing on how cauldrons were portrayed and what that can tell us about people's views of their magical uses and symbolism. I aim to write up a longer account of that at a later date.

Georgi Georgiev offered a view of an ancient folkloric ritual and performance art from southern Indian, called Teyyam. His talk was called Dancing Vessels of the Gods. He discussed possession rituals in Dravidian culture and its links to Tantric occultism. After the talk there was a short film showing the dances by costumed performers who represent traditional gods during festivals.

The History, Development and Practice of the Grimoire Tradition was the title of a talk by ​David Rankine, who is renowned for his books on traditional magic. He is the co-author of The Veritable Key of Solomon, which is probably the most comprehensive version of the Key of Solomon ever published. His presentation looked at the grimoire tradition, from its roots in texts of the ancient world through its development in the Middle Ages and Renaissance to modern times.

Although the description of his talk in the programme said that the focus would be on significant grimoires and the magicians who worked them, in fact he also gave lots of advice to anyone wanting to practise grimoire magic. This included working in a group with a minimum of two people, starting with The Key of Solomon before going on to more difficult things, and making sure that at the end of the rite you fully dismiss any spirits summoned. (You can view David's Key of Solomon on Amazon.)

The finale of the day was music from a new band called Morvoren formed by traditional witches Gemma Gary, Jane Cox and Anna Dowling. It was entitled Music for the Devil.

The idea for Morvoren arose from the invocations and chants found in Gemma’s book The Devil’s Dozen – Thirteen Craft Rites of The Old One. Anna, who composed the music, said: "The book contains many invocations that naturally lent themselves to being put to music. Morvoren aims to capture the mystic nature of the invocations and bring them to life in a new way outside of ritual. The band is also very inspired by the guising tradition of West Cornwall, and we also perform guising tunes in costume."

Morvoren are pictured to the left, and it is their 'Obby 'Oss in the picture at the top. You can view The Devil's Dozen on Amazon. 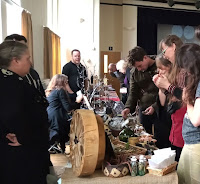 I had a wonderful time at The Nameless Arte, learnt a great deal, met up with some great friends and wished I had more money to spend at the market stalls packed with all the books, spell components and ritual tools a traditional witch might need (pictured right). It was very different from Witchfest, which I went to the previous weekend. While Witchfest is full of pretty young witches, many wanting to learn the basics of the Craft, The Nameless Arte is more a gathering of wise old crones enjoying a good cackle and exploring the darker side of magic.

Sadly there will be no Nameless Arte in 2020. Organiser Andy Mercer has decided to take a break for a year. Hopefully it will return in 2021. You can follow The Nameless Arte on Facebook to find out more: https://www.facebook.com/groups/thenamelessarte/

I love this event too... In fact I think it is my favourite in the Occult calendar. Great to see you too... But what of the chicken foot? Lol

The chicken foot in the road outside was weird!

'Obby 'Oss made me think... I'm from Poland where every year around Christmas time homes are being visited by dress up groups of carolers (I think that's the closest name in English I could find). Traditionally, one of the figures is a beast called Turoń (look it up on wikipedia, it's quite cool). Amazing how much of folklore is linked to the witchcraft.

Oh thank you for mentioning that - I will look up the Turoń!