Witchfest 2019: A Wonderful Day with Friends 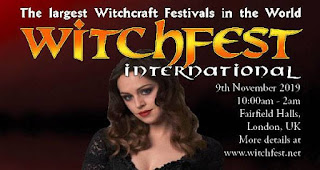 Witchfest returned to its home at Fairfield Halls in Croydon on Saturday, and for the witches and other pagan folk there it was like the biggest family reunion. I was so happy to be with them, to meet up with many old friends and make a few new ones.

Fairfield Halls has only recently reopened after being closed for refurbishment since 2015. The building hasn't changed much in layout, but is brighter and more comfortable in its decor and furnishings.

Witchfest International moved to Brighton in 2016 and 2017, but although the seaside venue was good, people found it a bit difficult to travel to, so ticket sales dipped. The organisers, Children of Artemis, decided to run smaller events in Reading and the Midlands in 2018. However, it seemed as though Witchfest International 2019 was a huge success, so I really hope it stays in Croydon for many years to come.

As usual, the quality and variety of talks, rituals and entertainment on offer were excellent. I arrived in time to hear Jenny Cartledge give a beautiful opening blessing, then I went around the market. Two of my favourite traders were there - Bewitched Botanicals and Treadwell's Books - but there were also many other tempting stalls selling all sorts of witchy goodies.

The talks I went to included Philip Heselton on his research into the origins of the New Forest coven for his forthcoming book, Damh the Bard on the Pagan Grail, and Professor Ronald Hutton on The Wicker Man in historic writing and the movie of that name.

I rather unexpectedly got called up on stage to represent one of the elemental quarters of the circle by Rufus Harrington in his talk on the magic of the mind. I signed copies of my book on poppets and magical dolls and, right at the end of the programme of lectures and workshops, I gave a talk on the subject. In the evening there was music and socialising until 2am, but I must admit I left in time to catch a train home. I still felt a little worse for wear the next day, but it was worth it.

If you are wondering why I didn't take any photos at Witchfest, it was because photography isn't allowed except in one of those booths where you can get a picture of yourself and your friends. A few people did appear to be unaware of the rule on not taking snaps, but I decided to be a good witch for once and left my camera in my bag. The images on this page show a banner advertising the event and the cover for the DVD of The Wicker Man.

You can find out more about Witchfest and other events run by Children of Artemis here: https://witchcraft.org/