A Winter Solstice Temple on the Bank of the Thames 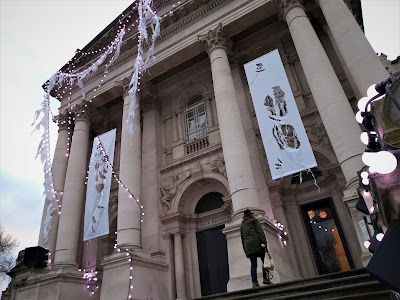 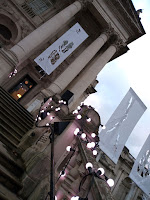 This yuletide, a temple to the winter solstice stands on the north bank of the Thames. The front of the Tate Britain has been transformed by artist Anne Hardy as the art gallery's winter commission entitled The Depth of Darkness: The Return of the Light. The details about it say:


Anne Hardy reimagines Tate Britain as being in an altered state, influenced by the rhythms of the natural world. The titles comes from a pagan description of the winter solstice as the darkest point of the year. It is a moment of fragility before the renewal experienced with the return of the sun.

The installation includes lights and an audio recording of sounds of the sea and the river Thames. The display loops, but the entire sequence lasts about 20 minutes. It is intended to bring to mind the changes that have happened over the millennia, including rising and lowering water levels, as well as possible alternate realities.

While this might not be a temple for religious ceremonies, it is a place for contemplating the cycles of nature. While many cultures have festivals that include lights at this time of year, it is a time of darkness. The return of the sun and the promise of longer days ahead can always give us hope. 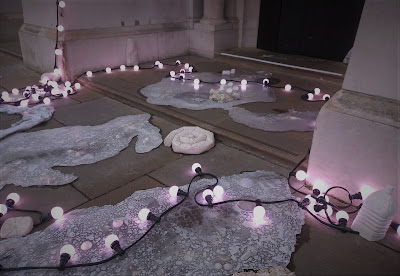 It's a lot of fun i experienced the whole thing on a cold chilly night it is quite awesome. Get out the car and stand in among-st it to really experience its spookyness.

I was there late afternoon, but I would love to go back at night.