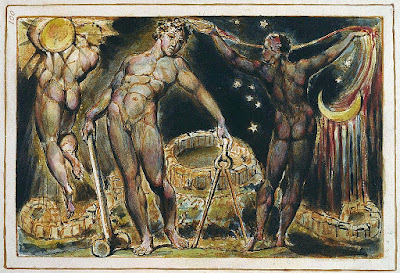 As one of my resolutions this year I've been blogging about the gods and goddesses of London. A visit to the William Blake exhibition, which is currently on at the Tate Britain, inspired me to write about the deities of the unique mythos created by Blake.

Although Blake was Christian, he envisaged concepts of deity that were highly non-traditional. They were possibly inspired by Gnosticism, Freemasonry and William Stukeley's ideas about Druidry. In his artwork and poetry, Blake depicted a deity called Los as being very much a London god. Los represented the imagination and was in opposition to Urizen, the deity Blake saw as representing reason and law. (The picture at the top shows two forms of Los with his female emanation, Enitharmon, by Blake from Jerusalem.) 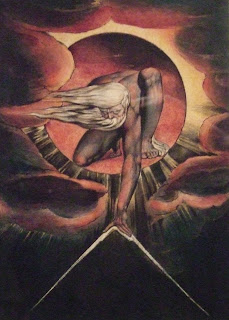 He often drew Urizen as an old man with a beard, using architect's tools to both create and constrain the universe, as in Blake's picture (photographed right), called The Ancient of Days. Later, Blake saw Urizen and Los as being among four Zoas, which came into being due to the fall of humanity. He called the archetypal human being 'Albion', which is also an old name for Britain. The Zoas were Urizen, Tharmas, Luvah/Orc and Urthona/Los.

Tharmas represents sensation. He has a female counterpart called Enion, who represents sexual desire. Luvah represents rebellious passion and is the opposite of reason. After his fall, he gets called Orc. Vala is his his female counterpart. Urthona is a blacksmith god and is the Zoa of creativity. In his fallen form, Urthona is called Los, who Blake saw as creating the mythical four-fold city Golgonooza: an eternal metropolis of art and science, and visionary form of London itself.

Here is a quote from Blake's epic poem Milton, about Golgonooza and its relationship with London, which he sees spreading in all directions:


From Golgonooza the spiritual Four-fold London eternal
In immense labours and sorrows, ever building, ever falling,
Thro Albions four Forests which overspread all the Earth,
From London Stone to Blackheath east: to Hounslow west:
To Finchley north: to Norwood south: and the weights
Of Enitharmons Loom play lulling cadences on the winds of Albion
From Caithness in the north, to Lizard-point and Dover in the south
(Milton 6:1-7)

Blake lived in London for most of his life and the city inspired much of his art, poetry and ideas. I can thoroughly recommend going to see his artwork at the Tate Britain exhibition. If you want to explore London and learn more about the places Blake lived and worked, artist Louisa Amelia Albani has created a small book called William Blake's Mystic Map of London, full of information and maps you can follow. You can buy copies online and at Treadwell's Bookshop.

I went to Uni in London and worked in the city for a while after qualifying, so I love your posts about London history, Gods and similar.

Don't know if this is your "cup of tea" but have you come across the Ben Aaronovitch Rivers of London series?

Jayne, Thanks for your email and glad you like the posts. I've read all the Rivers of London books and I agree they are excellent.