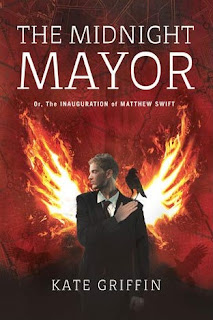 I have two friends and a bad cold to thank for some fascinating fiction set in London I read recently. The book is The Midnight Mayor, an urban fantasy novel by Kate Griffin. One friend recommended it, the other friend gave it to me as a Yule gift, and the cold that struck me a few days ago left me not wanting to do anything except lie in bed reading something entertaining.

What I enjoyed most about the novel is that the author clearly knows the city: its myths, legends, geography and what it is like to live there. The action almost entirely involves the main character - an urban sorcerer called Matthew Swift - travelling around London and you can tell that Kate Griffin has walked where he walks and knows the ground well enough to describe it vividly.

The plot involves the potential destruction of the city. As the description of the book says: "One by one, the magical wards that guard the city are failing: the London Wall defiled with cryptic graffiti, the ravens found dead at the Tower, the London Stone destroyed..." These are, of course, well known and traditional legends about what keeps the capital safe. The magic Matthew Swift wields is far more contemporary and city-specific. He uses the power of electricity, mobile phones, and cans of spray paint. The Underground sign is a protective glyph and the names of council waste disposal firms are words of power against a fatberg from the sewers that has gained a life of its own.

I was slightly puzzling over the nature of the adversary described as "the death of cities", who is depicted as being made of paper, until I started reading another book I was given for Yule: Cruickshank's London: A Portrait of a City in 13 Walks. In it, Dan Cruickshank describes his personal experience of a 1993 IRA bomb blast in the city. He writes:


"I raced to the window and saw, to the south, smoke in the sky and a hurricane of paper - I suppose the contents of the desks and filing cabinets of thousands of City workers who had just lost their offices."

That showed me the detail of research Kate Griffin had done. Her bad guy isn't just some random demonic entity, he is the embodiment of what really happens when cities explode.

You can view The Midnight Mayor on Amazon. It is published by Orbit. You can also view Cruickshank's London on Amazon.