The Hermit Card from the Lost Tarot of Nostradamus 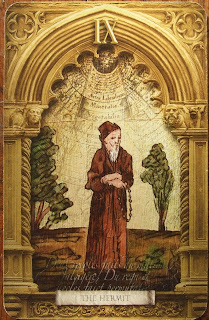 One of the gifts I was given for Yule was a set of the Lost Tarot of Nostradamus. It is an interesting deck of cards as it was created using the images from a manuscript containing 80 paintings, believed to have been devised by Michael de Nostredame, or Nostradamus. The manuscript had been lost for centuries, but was rediscovered in the 1990s. Tarot experts John Matthews and Wil Kinghan believe that the pictures had been intended for a set of divination cards and painstakingly used them to create a modern version of what the deck might have been like.

I used my copy to pick a card for the day - and I revealed the Hermit. In many decks, this represents solitude and contemplation, but is also a card for the depths of winter. It often shows an elderly person holding a lantern, and can represent finding a wise teacher to help guide the way through dark times. The man in the Lost Tarot of Nostradamus doesn't hold a lamp, but instead looks much more like a traditional religious hermit. That probably makes sense for pictures created back in the 16th century.

The book that comes with the modern boxed set, written mainly by John Matthews, describes the Hermit's older and more dangerous aspects. He was linked to old age and time as a destroyer. However, he was also a prophet who looked into the future as well as the past and the present. John Matthews suggests the image on this card might be a self portrait of Nostradamus himself. Interpreting the meaning, he writes:


The Hermit is a card that suggests not only the deep contemplation of events, but also the acknowledgement of the passage of time and the way this impacts upon the issue under consideration.

If you feel this applies to you, then you might need some time alone to think about things. Look for a way out of isolation too, perhaps by finding someone to guide you.