Cruickshank’s London: A Portrait of a City in 13 Walks 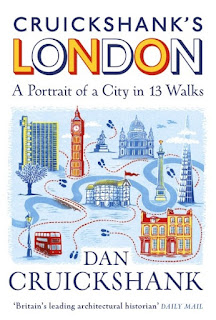 I was given a copy of Cruickshank’s London: A Portrait of a City in 13 Walks for Yule. I've spent the last week reading it, and really enjoyed it.

Now, I realise that Dan Cruickshank, TV presenter and architecture historian, is a bit Marmite. People tend to love him or hate him. I love his passion for the topics he talks and writes about, particularly when that's the buildings and history of London, even if I don't always agree with him. However, one thing I do agree with him about is the importance of London's pagan history.

Cruickshank’s London starts by discussing the Temple of Mithras very positively. Then, the first walk, on Hampstead Heath, explores the evidence for ancient settlements there, and modern druid rituals on Parliament Hill at the Summer Solstice. Carvings of the Green Man in cathedrals and secular buildings are mentioned, and the book ends with a walk around Brixton, including a description of a spiritual shop there that specialises in herbs, which I have heard local pagans recommend.

Obviously the book isn't only about paganism. Cruickshank is very wide ranging in what he covers. His walks encompass the estates that built up around the New River in north London, Wren and Hawksmoor's buildings in Greenwich, the historic markets of Spitalfields in the east and those of Portobello Road in the west, as well as many walks in and around the City.


In Cruickshank’s London, Britain’s favourite architectural historian offers a tour through thirteen districts that made London into London. From the mysterious Anglo-Saxon roots of Hampstead Heath, via Christopher Wren’s magisterial City churches, to the industrial bustle of Victorian Bermondsey, each of his walks explores a crucial site in our capital’s history – and reveals how it forged the modern capital.

When the weather gets warmer and the days lighter, I am going to enjoy returning to Cruickshank’s London and using it to explore on foot, rather than just from my armchair.

You can view Cruickshank’s London on Amazon.