Following the Mari Lwyd Around the Pubs of London 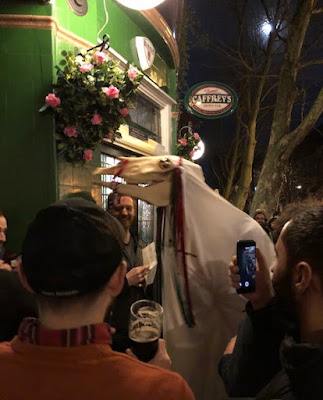 Mari Lwyd means 'Grey Mare' in Welsh. In South Wales there's a traditional custom in which a decorated horse's skull, known as a Mari, is paraded around an area every New Year. A party of people follow the Mari and win access to the houses along the way by improvised sing-offs. Once inside the house, there is be food, drink and the exchange of best wishes for the new year.

For five years running, The Spring Heeled Jacks ceilidh band has organised the Mari Lwyd Llundain, with the help of the London Welsh Centre, following the 21st century tradition of visiting pubs instead of houses.

More than 200 people turned up to the 2020 event on Friday 10 January. I was there to enjoy the custom at the first pub along the route - the Boot, St Pancras. The photo to the right was taken by John Davies, as the Mari Lwyd was approaching the pub.

Song sheets in English and Welsh were handed out before it arrived and singing practise ensured everyone was in fine voice. Other pubs along the route were the Harrison and the Calthorpe Arms. The event ended at the London Welsh Centre, where there was more singing and some Welsh twmpath dancing.

Although parts of the evening were in Welsh, you certainly didn't need any Welsh ancestry to enjoy it tremendously.