Review: A New Dictionary of Fairies by Morgan Daimler 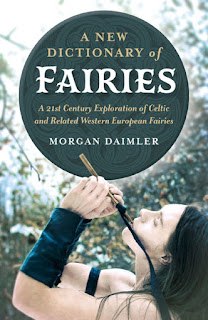 Morgan Daimler is a foremost expert in Celtic fairy lore from the standpoint of a pagan practitioner, as well as having studied the subject in an academic capacity for decades. Morgan's latest book is A New Dictionary of Fairies, and it is an essential reference work for anyone interested in this topic. It is also a jolly good read.

At the weekend, I intended to skim over the book in order to review it, looking up a few things that interested me. After all, one doesn't normally read a dictionary from cover to cover. Except that's exactly what I ended up doing. After reading the introduction and first few entries, I found I just wanted to go on reading, and spent an entire afternoon on the sofa, happily away with the fairies.


"Fairies are a challenging subject, intertwining culture, folklore, and anecdotal accounts across centuries and millennia. Focusing primarily on the Celtic speaking cultures, with some material from adjacent cultures including Anglo-Saxon and Norse, A New Dictionary of Fairies has in-depth entries on a variety of fairies as well as subjects related to them, such as why we picture elves with pointed ears or where the idea of fairies being invisible comes from. It also tackles more complicated topics like the nature and physicality of the fairy people. Anyone with an interest in the Good Neighbours will find this book a solid resource to draw from."

The book's subtitle is 'A 21st Century Exploration of Celtic and Related Western European Fairies'. While it concentrates mainly on Irish, Scottish and Welsh folklore, it also  looks at some other legends including Norse mythology and a few tales from various parts of England. I've seen it favourably compared with Katharine Briggs' Dictionary of Fairies, and I agree it is a worthy successor to the famous folklorist's lauded work.

Morgan Daimler is a prolific pagan writer, having published more than a dozen books under Moon Books alone, including: Travelling the Fairy Path,  Fairies: A Guide to the Fair Folk, The Morrigan, Gods and Goddesses of Ireland. They live in Connecticut, USA. You can listen to an interview with Morgan on Mark Norman's Folklore Podcast.

You can view A New Dictionary of Fairies on Amazon