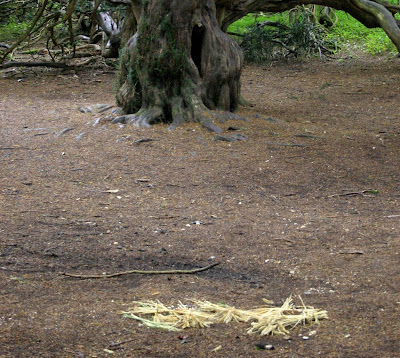 This photograph of straw dolls at Kingley Vale was sent to me by the artist ROYCURTIS (the caps are deliberate, I've been told). It is one of two photos he emailed me, both showing magical workings in the ancient yew forest in Sussex. He wrote:


"I saw your post An Ancient Yew Tree at Kingley Vale after going through some photographs of Kingley Vale taken on 2 August 2008. Amongst these photographs, I found the attached images, which I think might be of interest to you and your readers. The date that they were taken is a clear indicator of what they must relate to.

"From memory, I thought the signs of these workings were found in the same place, but the times that the photos were captured indicate that they could be separated by up to a mile (by the wending of the winding paths)."

I will be putting the second image up on my blog some time soon, but I thought I'd make a few comments about this one first. The photo would have been taken just after Lammas, the Wheel of the Year festival at the start of the grain harvest. Straw dolls or corn dollies are traditionally made at harvest time, but the reasons can vary.

Sometimes they are made from the last sheaf cut and kept throughout the winter as a home for the spirit of the field to live in. The doll is then ploughed back into the soil when seeds are sown at the start of the next planting season. Another tradition is to make a straw effigy as a booby prize for the last farmer to finish harvesting. This picture, however, I feel shows an offering made to the yew trees in the forest. In general, I would not recommend leaving obvious offerings in public places after finishing a ritual, as it can be considered littering. However, straw is biodegradable and won't harm wildlife - and it has provided a fascinating photograph.

ROYCURTIS said that there are some better images on his blog post about Kingley Vale and magic. He added: "I would strongly recommend a visit to the site. It's a powerful and deeply evocative place, regardless of the nature of your beliefs. And if you head there at the right time of year, you might be greeted by the sight of glow worms or fireflies."

I do intend to visit Kingley Vale very soon.  You can read more about dolls for season rites and celebrations in my book Pagan Portals - Poppets and Magical Dolls.

The photo is copyright THE FABULOUS ROYCURTIS.