Folklore: Friday 13 and a Flying Penis for Luck 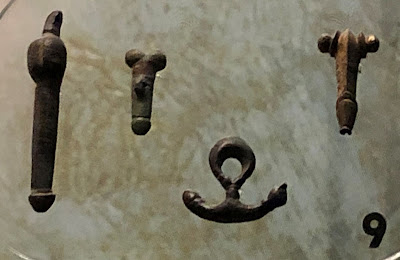 We might all be looking for something to give us a bit of extra good luck this Friday 13, and we might even wear some sort of amulet or talisman to symbolically ward us from ills. If we were living back in Roman London, that might have taken the form of a flying penis. While penises were generally thought of as protective symbols, giving them wings was thought to make them extra effective against air-borne threats. Other versions of the charm had a clenched fist on the other end (a gesture with phallic connotations), while some were just the member on its own.

According to Atlas Obscura, mothers would often give their children penis amulets to wear because child mortality was particularly high in Roman cities. You can see the photographed set of lucky Roman penis amulets in the Museum of London while others are in London's Wellcome Collection. Of course, if you really want to avoid getting ill today you are probably best avoiding public places, and washing your hands regularly rather than relying on a lucky charm.

This may be entirely unrelated, but it reminded me of the Hawaiian goddess of fertility Kapo, who once saved the goddess of volcanoes Pele from being raped by sending her flying vagina as a lure. Flying genitalia seem to have been all the rage in ancient times!