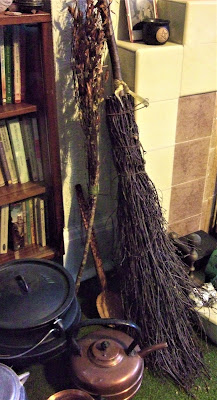 March is the customary time for spring cleaning, and we are all taking extra care to keep ourselves and our surroundings spotless at the moment. It is also time of year for spiritual cleansing rituals in many world religions.

Modern pagans perform cleansing rituals before most ceremonies. This is to get rid of unwanted energy so the intended magic is not entangled with other thoughts and wishes that might be floating about. The Spring Equinox, which is on March 20, is especially suitable for performing a more thorough spiritual spring cleaning of the home.

The first thing to do is give the place a good general clean and tidy. Be as thorough as your time and energy allow. Ideally, put everything away in its proper place and clean all the surfaces, but do what you feel capable of. Then, clean yourself. A ritual shower or a bath is perfect, but at least make sure you wash your hands very thoroughly (I'm sure everyone is doing that anyway at the moment).

Then clear your thoughts. You can do this by meditating or simply breathing in and out slowly at least three times; visualising breathing out unwanted concerns, and breathing in calmness and clarity. After that you can turn to clearing your space of energies you no longer want hanging around. Here are some methods I use, with some extra suggestions for those with limited mobility:

Sweeping with a Besom
A besom is a traditional witches’ broom and is used to clear space in many traditions of English magic. The head is made of twigs. Birch, which represent new beginnings, is good. However, the broom shrub is so called because it was so widely used for that very purpose. The handle should be sturdy wooden pole. Hazel or ash are good as they both represent magical power. You can still buy traditional besoms at country fairs and some hardware or gardening shops, as they are also great for sweeping up dead leaves in the garden, or you could have a go at making one yourself. This is a good time of year to do that, before leaves start appearing on the trees. You can use a mini broom, even one bought at Halloween, if a real broom is too heavy. It is the symbolism that counts.

To ceremonially sweep with a besom, go around each room in an anti-clockwise direction, sweeping from the centre outwards and visualising unwanted energy being swept away. The anti-clockwise (or deosil) direction represents banishing. 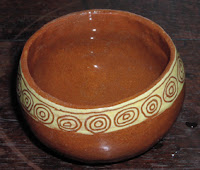 Salt is an ancient cleansing product. It naturally kill bacteria, but also has traditional uses in magical cleansing rites.

Get a bowl of clean water and a bowl containing a small amount of salt. First, turn your attention to the water. It might look clear, but to prepare it for spiritual cleansing you should visualise it being purified of all unwanted energy and dedicate it for the purpose you have in mind. Then turn to the bowl of salt and visualise the same for that. Mix the salt and water, then go around each room sprinkling it as you go. This is sometimes called ‘asperging’. Do be careful not to get it on anything that could be damaged or stained by salty water. If you are worried about dropping the bowl of water as you go about, a 21st century alternative would be to put the salty water into a spray bottle and spray a fine mist around the rooms.

Herbal Infusions
Instead of asperging or spraying salty water, you can use an infusion of cleansing herbs. One of my favourites is mugwort (sometimes called Artemesia). This is a protective herb that grows naturally in England. It is said to keep harmful spirits at bay and promote psychic visions. You can use it to wash or cleanse things like crystal balls as well as using it as a room spray. There is one word of caution, however: mugwort should never be used by anyone who is pregnant. Other herbs suitable for making cleansing infusions include rosemary and lavender, both of which also grow in England.

Many spiritual traditions, all over the world, use smoke to purify sacred space. A general term for this is fumigation. Although that word can also mean using chemical gasses to kill pests, it traditionally meant using smoke for cleansing.

Fumigation can be done by burning dried herbs on their own, sticks of incense or loose incense made from mixtures of dried herbs, resins and tree bark. If you have loose incense you will need to light a charcoal disk in an incense burner or cauldron and sprinkle the mixture over the disk when it is glowing brightly, then allow the smoke to fill all the space to be cleansed. You can waft your smoke into corners using a fan or just your hands. Make sure you put incense burners on something that won’t get damaged by heat. You can buy blends of loose incense specifically designed for cleansing ceremonies. If you are burning herbs alone, then mugwort, rosemary and lavender are again suitable. 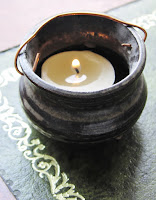 Cleansing with Light
In my candle magic workshops, I teach an easy way of cleansing unwanted energy from items you are using for spells and rituals. All you have to do is place the item in the light of the sun, moon or a blessed candle, then visualise the light washing over the item and cleansing it of all influences except those of your own intention. You can also use light to cleanse space. Open up the curtains and let the light of the sun or moon flood into your room and visualise it chasing away all unwanted energy. You can also carry a candle around, especially into dark corners where natural light doesn’t reach. Do make sure you put the candle securely in a lantern, holder or cauldron first though. You don’t want it to fall over and set light to anything. An even safer alternative, which is ideal for those with limited mobility, is to leave the candle on a flat surface but use a wand to visualise spreading the light all around you.

Bells and Gongs
Another traditional way to clear unwanted energy from a space is sound. Bells and gongs with clear tones are ideal. Go from room to room ringing the bell or sounding the gong, again paying particular attention to the corners of rooms. You can point the bell in the direction you want if you can’t physically get into all areas of your home. If you don’t have a bell or a gong, then find a wine glass and gently tap the side with a spoon to make a ringing note.

There are many, many ways cleansing, but I would always recommend using techniques from your own tradition or culture, rather than methods from traditions you have not been trained in. I would also suggest using materials that are grown or made locally to you, rather than things that have been imported from abroad, for environmental reasons as well as ethical ones.