World Book Day: The Books That Taught Me Witchcraft 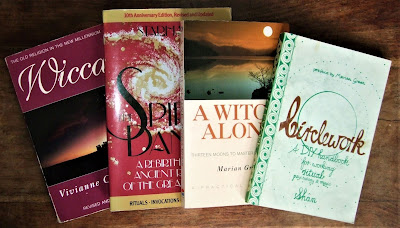 Today is World Book Day. While the main aim of this international literary event is to ensure children and young people have books to read, it is also a celebration of authors, illustrators, books and reading. So, on this World Book Day, I thought I'd write about the books that most influenced me when I was learning to be a witch.

Circlework: A DIY Handbook for Working Ritual, Psychology and Magic

This was written by Shan, who I trained with at House of the Goddess in south-west London. House of the Goddess was Shan's home and temple space, but it was also a wonderful meeting place for those following a witchcraft path in London in the 1980s and 1990s. I enrolled on one of her courses called Circlework, which taught the basics of witchcraft. That was also the title of her book covering pretty much the same material.

I still think Circlework offers a superb introduction to the practical side of modern pagan witchcraft and the psychology behind how magic works. What I particularly like about it is the way it gives clear and succinct instructions that are really easy for a beginner to follow, but also explains the theory behind it in a no-nonsense kind of way.

Although the book is long out of print, you can view Circlework on Amazon and second-hand copies do come up. I would still recommend it.

Marian Green wrote the introduction to Shan's Circlework and Shan recommended Marian's A Witch Alone to me. It was the perfect book for me to continue developing my witchcraft skills, although it offers a very different way of viewing the basics of witchcraft. It is purposefully aimed at solitary practitioners. Back in the mid to late 20th century, solo practice was often viewed as second-best to coven work, particularly by initiatory Wiccans. A Witch Alone turned that on its head and offered the view that many magical practitioners, from wise women to shamans, would have worked alone in the past.

This book offers a course covering thirteen lunar cycles that you can follow on your own to develop your magical powers by exploring the local landscape, getting in tune with the natural world, following the cycle of seasons in the area where you live, and developing a personal connection with deities. Marian Green believes this way of working is in keeping with traditional witchcraft. She doesn't teach the history of what cunning folk or witches did in bygone centuries so that we can cast exactly the same spells as them, but instead shows how we can develop our own contemporary practices in a way similar to how our ancestors might have developed theirs.

This book is still in print, and I would recommend it for those wanting to start out on a solitary path. You can view A Witch Alone on Amazon.

The Spiral Dance: A Rebirth of the Ancient Religion of the Great Goddess

Starhawk's The Spiral Dance was one book every pagan had to read back in the day, and it is still a best-selling classic in the field of Goddess-centred spirituality. It was hugely influential, especially in America, and still is, with new and updated editions being brought out over the years. It offers both a practical guide to ritual working - how to cast circles, raise energy and celebrate the festivals of the Wheel of the Year - and a way to reconnect with the Goddess as deity. The exercise and rituals in the book are still beautiful and powerful.

Nowadays, I would say the view of the history of  witchcraft and religion given in the edition I own is a bit out of date. Since Ronald Hutton's The Triumph of the Moon, most pagans accept that the idea of witchcraft as an ancient Goddess-centred religion is probably not accurate, but it was a popular and widely held belief when Starhawk first put words on paper. Also, the edition I have promotes the concept of gender polarity as something a lot more fixed than many would now. I haven't read the latest version of The Spiral Dance, but I'd like to find the time to do so in order to see how Starhawk's views have changed.

You can view the 20th anniversary edition of The Spiral Dance on Amazon.

Wicca: The Old Religion in the New Millennium

After spending some time as a solitary witch, a friend invited me to join a Wiccan training coven. This was the best thing that could have happened to me at the time. Although I had learnt a lot at House of the Goddess and then on my own, the depth of training offered at the coven was superb. We met one evening a week for lessons on all aspects of the Craft and on top of that there were rituals at the full moons and festivals. After just over a year of this training - as is traditional in Wiccan covens - I was initiated.

While most of the training was taught in person, the one book I was recommended to read was Wicca: The Old Religion in the New Millennium. It covers Wiccan practices in depth from the perspective of Jungian psychology. The author, Vivianne Crowley, is a university lecturer and psychologist as well as being one of the leading Wiccan teachers. She is also an absolutely lovely person, a brilliant writer and a fantastic witch. This book is still one I would thoroughly recommend (although, again, some perspectives on the history of Wicca and witchcraft given in my old edition are now a bit out of date).

You can view a recent edition of Wicca on Amazon.

The picture at the top shows my copies of the books I've mentioned here, while the images next to each description are Amazon links and some of them show slightly different editions.