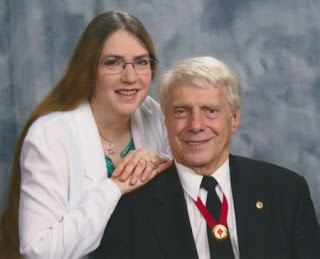 In this post, Lea Jackson contributes to A Bad Witch's Blog by interviewing Chic Cicero and Sandra 'Tabatha' Cicero, Chief Adepts of the Hermetic Order of the Golden Dawn (pictured left).

Lea: My first question for readers who may not be aware of this is what got you involved into the occult?

Chic: I had been studying ceremonial magic for a number of years. During the 1960s I worked with Francis Barrett’s text The Magus, based on Agippa’s Three Books of Occult Philosophy. I was particularly fond of talismanic magic. Then in the early 1970s I came across the book The Golden Dawn by Israel Regardie. After paging through it, I knew that I had found my path. I was very impressed with the ceremonies and the quality of work that the Golden Dawn produced. It just felt right to me. Here was a system of magic that was effective and beautiful, I felt like I had just discovered a new purpose in my life.

Tabatha: I have always had a very strong sense of the Divine Presence and a keen interest in comparative religion, the occult, and esoteric subjects of all stripes. In the early 1980s I came across Israel Regardie’s book The Golden Dawn in a Walden's book store in San Angelo, Texas. It was the blue hard-cover Llewellyn edition. I browsed through the pages and thought to myself, “This is the only book on magic that I will ever need.” I had $38 in my pocket, and the price was around $37.50. I considered this a good sign. When I looked at the ritual of the Pentagram, I was immediately attracted to the organization of the workings. The invocation of the archangels had me hooked immediately. The very first time I performed the LBRP and visualized the four archangels around me, there was no turning away from the system. I had to know more.

Lea: After discovering the occult through these books what was the next step in your journey?

Chic: In 1968, I was traveling around the country with my ex-wife, who was a professional dancer. At that time, I was making jewelry, props, and elaborate costumes for dancers. We had a two-week engagement in Columbus, Georgia. One night while we were there, I had a very moving mystical experience. I was directed to bury a talisman in the center of a crossroads. This was easy to do, because a new main road was under construction at the time. So, I took my personal talisman, which was dedicated to the god Indra, and which I had carried with me for ten years, and buried it in the middle of Victory Drive. We continued to travel for a couple of years.

We were back in Buffalo when one night I got a phone call from someone who had heard from a friend that I was interested in buying a nightclub. This person had just taken over a nightclub and needed a partner to run it. This club was called the Inferno Club, and it was located in Columbus, Georgia. So in the early 1970s, I found myself being drawn to the city where I had buried my talisman years before. It wasn’t long before I became sole owner of the Inferno Club. My business was going well, and it gave me the resources and time that I needed to begin building a Golden Dawn Temple. In 1977, I rented an old house that would be used only for the temple.

I first began corresponding with Israel Regardie in 1981. By that time, we already had an independent Golden Dawn Temple in Columbus, Georgia, as well as an OTO camp. My ex-wife and I had initiated ourselves and about seventeen other people into the GD. We finally met Regardie in 1982 when he came to our temple for the purpose of consecrating our Vault of the Adepti (the ritual chamber needed for Inner Order initiations) and performing initiations into the Adeptus Minor grade of the Golden Dawn.

Tabatha: I also a professional dancer and in 1983 I found myself working a nightclub in Columbus Georgia, where it seems like everyone was a member of a secret magical society. That was how I first met Chic who was separated from his ex-wife at the time, and who was running both an OTO camp and a Golden Dawn temple. I was intrigued, so I joined both organizations. I began my magical studies and started to create my own Tarot deck, based on the descriptions of the cards in Israel Regardie’s book The Golden Dawn. A couple years later I met Israel Regardie, when Chic and I went to visit him in 1985, shortly before he died.

Lea: What is the basic philosophy of the occult?

Chic: The word occult simply means “hidden,” but in the context of magic it refers to spiritual wisdom that is reserved for those who will treat it with respect and not abuse it. It also refers to divine knowledge that can’t be fully communicated except from within. We prefer to use the term magic, which comes from the Greek megas meaning “great,” indicating the “great” science. Golden Dawn magicians often refer to the purpose of magic as “the Great Work.”

Tabatha: Magic is a spiritual science as well as a technical system of training. It requires work and discipline. However, it is also mysterious and enigmatic, and its mechanics are not easily explained. The definition of magic that we have come to settle upon is this: Magic is an art and a science the goal of which is to produce changes in both internal and external reality (subjective and objective reality) through the knowledge of divine powers and the manipulation of unseen forces inherent to both realities. The change caused through magic can occur in the outer world, in the magician’s consciousness, and most often in both, for changing one often changes the other.

Magic in and of itself is neither black nor white, good nor bad, beneficial nor harmful. At its most basic level magic is simply a process. It is the intent of the magician that makes it positive or negative. It’s important to remember that whatever magic you send out into the universe is exactly what the universe will send back to you.

Lea: Do you believe in God how would you define God?

Chic: You could write a book just on this question! It’s safe to say that Golden Dawn magicians are not atheists. Our practitioners come from a wide variety of different faiths: Neopaganism, Christianity, Wicca, Gnosticism, Buddhism, and Judaism, just to name a few. Every aspect of Golden Dawn practice is intricately associated with the idea of a transcendent, ineffable Deity - the highest concept of Divinity. Golden Dawn magicians often profess what might be described as ultimate monotheism—the idea that the Divine manifests in diverse forms, including gods, archangels, angels, intelligences, and spirits that human beings can connect with within their own cultural norms and spiritual traditions. But ultimately all of these beings may be traced back to the One Divine Source of All. God is the ultimate force/energy/being that connects everything in the manifest universe. We use so many words and phrases to describe God: Ultimate Reality, Ultimate Divinity, the Divine Source, the Absolute, the Ineffable, Divine Spirit, the Eternal Self, Divine Light, and so on. But for us, the best description of this Divine Light has come down to us from the Qabalah.

Tabatha: Qabalah teaches that the Ain Soph (“the limitless”) manifested its energy into the universe through ten stages or “emanations” known as the Sephiroth, which are reservoirs or containers of divine energy. Each successive Sephirah became denser than the previous one, acquiring substance as energy descended into the various stages of manifestation. Eventually the energies solidified at the tenth and final level of emanation, resulting in the physical universe as we know it.

Qabalah draws upon the magician’s awareness of the transcendence of the Eternal. It also seeks to reveal the relationship between the Eternal Life of the Divine on one hand and human life on the other. The primary symbol of the Qabalah is the Tree of Life which has been described as a symbolic map of the universe in its major aspects, and also of its smaller counterpart, humanity—specifically the human soul. Study, ritual, and meditative practice will bring human beings into a closer relationship and understanding of the Divine.

Lea: What are some of the dangers that you think people should be aware of when practicing?

Chic: Years ago one of our students wanted to invoke some powerful Enochian entities when he was just beginning to learn about magic. This was a classic case of “lust for results” or performing complex magical workings just to “see what happens.” In nearly every case of this kind, students involved don’t really believe that magic is real, and so they perform advanced magical workings that they are not ready for, precisely because they want to experience the kind of magical “special effects” seen in Hollywood movies about the occult. In our example, the student in question was frightened when he opened psychological doors that he was totally unprepared to deal with. He left our group and swore off magic entirely.

Tabatha: One of the big dangers is ego inflation. Combating the problem of ego-inflation is one of the most important aspects of magical work. There are a couple of reasons for this. One of them is the re-emergence of infantile megalomania caused by the stimulating effects of magic. All human beings experience infantile megalomania when, as young children, we believe that the world revolves around us. As we grow into adulthood this over-inflated concept of self-importance gradually dissolves and the healthy adult ego emerges.

The practice of magic works to release latent energy from the sub-conscious and expand the mind’s horizon. As the magician becomes proficient in the magical arts they experience an increase in psychic awareness, knowledge, self-confidence, and feelings of new life-purpose and direction. But magic can also sometimes reawaken the mechanism of the infantile mega-ego, causing delusions of grandeur, self-importance and messiah complexes.

The practice of magic, when done with skill and for the right reasons, can unveil Divine truths. But when ego-inflation takes over, this wonderful tool for spiritual growth can become a vehicle for self-deception and imbalance.

Lea: What are some of the practical benefits of practicing magick?

Chic: Methods of magic include invocation, evocation, divination, the creation and consecration of talismans, skrying and other forms of astral work, vibration, meditation, visualization, and ceremonial ritual. Magic has its own set of attributes, mental processes, and natural laws. People sometimes take up the practice of magic for purely mundane reasons: they hope to invoke riches, love, or power. Yet if they persevere in their training students often come to a realization concerning the true purpose of magic, and their motivations for performing magic changes completely.

First and foremost, Golden Dawn magicians are healers. We seek to heal ourselves: body, soul, and spirit from every form of imbalance from without as well as from within. Through our magical work in the higher realms, we also seek to heal others by the diffusion of the “Light Divine” throughout the Sacred Universe.

Tabatha: Golden Dawn magic incorporates a process of memorization, creation, ritual work, and internal work that results in the direct stimulation of the magician’s will and imagination. Internal work, assisted by meditation and other exercises, sets the groundwork for psychic cleansing, higher awareness, and active linkage with Deity. There are many steps along the way involving balancing, cleansing, and training the magician’s psychic faculties and abilities. We seek to understand the transcendent and ineffable nature of God. We wish to commune with gods, goddesses, angels, and all aspects of Deity. We desire to expand our awareness beyond our five senses. We seek union with the Divine.