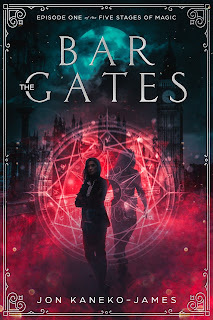 In this article, Jon Kaneko-James, author of the new urban fantasy novel Bar the Gates, writes about magic in fiction:


You couldn’t always sense the power of a magician’s house. It wasn’t always the same: for some it was psychic residue, for others a scattering of literal magical dust from various devices and amulets. Mostly, it was subtle, at the very edge of perfection, but here Walbrooke’s magic crackled and vibrated in the walls. He’d been on the hard side of magic too long to leave his house unprotected. He might not have been worried about burglars – if he had been, she would have found pieces of whoever forced the back door all over the garden – but spirits trying to make their way in would have been minced. Ingrained ritual spells and unobtrusive magical seals wrapped the house in a shell of predatory magic.

Sīd coaxed Ash back into wakefulness – or at least, into paying attention – before she dared open the door to let Simms in.

Darling, if I open this, will they be cleaning up my remains with a wet wipe?

The demon stirred. She reached out to test the defences with the air of someone probing a minefield. It would depend… so long as I bury myself fairly deep you should be alright. Even if it went off, they wouldn’t need a wet wipe.

Sīd smiled. Glad to hear it.

No, this is more a ‘large, ragged chunks’ sort of thing

That’s one of my favourite bits from my first adult Urban Fantasy (adult as in not YA or NA, rather than ‘bam-chikka-wah-wah’), Bar the Gates. It’s a story that I’ve been brewing for a couple of decades, a piece at a time – Sīd, a 37-year-old occult investigator who lives above the club that employs her, strange fairies in ill-fitting suits, Ash, a demon who lives in Sīd’s head.

One of the other things I learned was about what does and doesn’t work in fiction. I’d written three published book length works of fiction (and another seven or eight unpublished ones) before I started Bar the Gates, but when I started the Five Stages of Magic series, being a historian, I decided that I wanted to versions of spells from real manuscripts (with key bits taken out so they couldn’t do any harm).

The problem was that real spells from historical manuscripts aren’t written to look good in fictional narratives: they’re dull, lengthy and bombastic. I tried cutting the spells up, but now they were dull, bombastic and incoherent.

In the end, I hit upon something that worked: translating 80s songs into Latin. The first one I did had nothing to do with books, I was doing a Latin class and I wanted a bit of fun, so I translated The Ace of Spades by Motorhead:

Latin scholars will see it isn’t great Latin: not only am I not the world’s best Latinist, but I sometimes make counter-intuitive word choices so that they’ll avoid words that exist in English or stick more closely with the rhythm of the song. I found that it fit – songs have pace and build up, which makes them more suitable for a fantasy novel than passages of historical magic. Over the past two years or so, I’ve translated some fantastic 80s songs. I won’t give away the game, if anyone can decipher my terrible Latin, they can work out which songs are which themselves (In Somnia Electricud is fairly obvious…).

Bar the Gates is £2.99 on the Kindle store, or free if you have Kindle Unlimited. The paperback will be released on April 28. You can view Bar the Gates on Amazon.