Child's Play: An Excerpt from Broth from the Cauldron 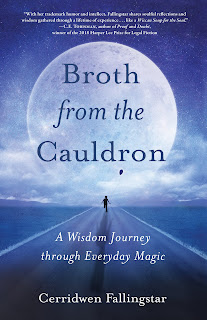 Here is an excerpt from a new book, Broth from the Cauldron: A Wisdom Journey Through Everyday Magic, by Cerridwen Fallingstar. In her book Cerridwen shares insight through charming and unique memoirs in vignettes on topics such as perception, fear, anger, trauma, healing, magic and gratitude. She recounts her earliest memories of reincarnation, her parents’ denial of the powerful intuition and visions they all shared, and the injustices and abuse which inspired her “career as a hippie, war protester, rebel, feminist, and bisexual Witch.” This excerpt is called 'Child's Play':

Child’s Play
The VW bus coasted to a stop in a wide, dusty turnout on the Pacific Highway just south of Malibu. The five of us piled out, and the guys opened up the back to check the engine. The fan belt was broken. There was no spare. Two of the guys raced up the highway to a distant gas station, but returned sweaty and disgruntled. The gas station had no fan belts for a VW van. Our trip to the beach was seriously endangered.

VW owners often carry an extra fan belt, that being the most vulnerable part of the car. We needed a matching VW, with an extra fan belt, to come to our aid.
Like any new but enthusiastic Witch, I started scanning the area for helpful rocks. Well, actually, pebbles. I found two matching gray pebbles and a stick. I drew a circle in the dust with the stick. Then I found a smaller pebble to ride upon the back of one of the larger ones. This
pebble I named ‘spare fan belt.’ The matching pebbles were VW vans. I put the one representing our van in the center of the circle, and placed the other one with its fan belt proxy at the circle’s edge. Then, like a little kid, I started making soft vroom vroom noises and guided the
second ‘van’ with its precious cargo towards the pebble representing our van in the center. My friend Jamal came over, looking puzzled.

“What are you doing?”

I explained my makeshift spell, finishing with “Don’t interfere with my concentration.”

“Riiiight...” Clearly thinking I was crazy, Jamal wandered back to the side of the road where our other friends were trying to flag down passing VW buses. I dropped back into the groove of my imagination. The pebble was a bus. It had a spare fan belt. It was traveling towards us. When the two pebbles touched, it would arrive. Closer…closer…closer…the roar of traffic from the highway became a hypnotic buzz. “Hey, ho, the magic bus….” I crooned under my breath.

The two pebbles touched. Jamal whooped. A VW van pulled in behind us at that precise moment. I stood, brushing the dust from my hands. I was not surprised that they had an extra fan belt. As we drove off to the beach, Jamal turned to me and widened his eyes. “I don’t know what you did back there, and I don’t want to know!”

Less than a year later, he was part of my coven.

People sometimes look at the trinkets and costumes and altar objects Witches make use of in their rituals and think the whole thing appears very childish. In a sense, they are right. Wicca, and every sort of shamanism, recognizes that magic and transformation can only occur when what we term, ‘younger self’ is engaged. Younger self is the awareness of the right hemisphere of the brain, the part that is fascinated by images and sensations, that thinks in circles and spirals rather than straight lines, the part that is entranced by metaphor and bored by logic. Children
dwell almost entirely in this world of faery, where the id and the unconscious reign supreme. Magic is second nature to them.

Once, when I was living with seven-year-old Mariposa, she was running through the house, trying to evade her mother, who wanted her to take a bath. Eventually, her mother trapped Mariposa on the ladder to her bunk bed and said, “Got you!” Mariposa squirmed and then cried out:

Her mother laughed so hard she let go of the child and Mariposa escaped, chortling in triumph.

Child-self, the wide-eyed innocent part that believes magic is not only possible but inevitable, is essential for the practice of magic. We have to be able to set aside (not get rid of, just set aside) the jaded adult, the alleged coolness of cynicism for a time, so we can climb down
out of our heads and feel the flow that is occurring, and ride with it.

Summer, a teacher from a group called the Alive Tribe, told me of a time she took the five kids of the collective to the beach at Drake’s Bay for the afternoon. After playing for a while they came to her and asked her to buy them snacks. She informed them that she had not brought her wallet.

“If you want money to buy snacks, you’ll just have to manifest it.” 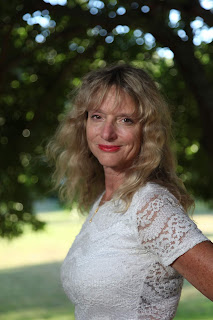 The kids shrugged, said OK and went back to playing. Within a short time a man dressed in a top hat and tails came dancing down the beach and twirled up to them like Fred Astaire. “It’s your lucky day kids!” he said, and handed each of them a dollar. They ran up to Summer waving their dollar bills. “We got it!” they crowed and ran off to the snack shack. What struck her was their utter lack of surprise or amazement.

This was excerpted from Broth from the Cauldron: A Wisdom Journey through Everyday Magic by Cerridwen Fallingstar. © 2020 by Cerridwen Fallingstar. She Writes Press, a division of SparkPoint Studio, LLC. Cerridwen Fallingstar is a shamanic Witch who has taught classes in magic and ritual for over thirty years. She gives lectures tying together psychology, spirituality, history, contemporary issues, and politics in an entertaining, enlightening, and humorous format. She lives in Marin County, California.

You can view Broth from the Cauldron on Amazon.