Colm Holland on his book The Secret of The Alchemist 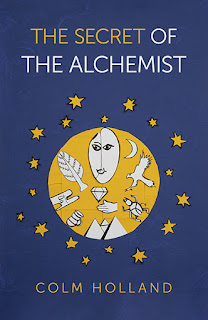 The Secret of The Alchemist, by Colm Holland, has the claim of being the first book to examine the real meanings buried within the bestselling The Alchemist by Paulo Coelho. In this article about his book, Colm gives an insight into the 'magic secret' and how it changed his life beyond all recognition for the better. He says he hopes others can benefit from his discovery and perform miracles.

In 1993 I was part of the team at HarperCollins that published The Alchemist by Paulo Coelho, with sales to date of over 86 million copies in 70 languages. When I met Paulo, however, he was an unknown Brazilian author, with his books only in Portuguese. At that time no one in the publishing company where I worked had predicted what a global bestseller Paulo’s book would be – until I read the manuscript before it was published.

I read his story of Santiago the shepherd boy, who follows his dream of finding treasure in the desert, and instantly knew – because of my own spiritual journey up to that moment I read the manuscript – it would be a global sensation. I persuaded my colleagues to give the book the highest level of marketing spend we could afford and the rest, as they say, is history!

When I met Paulo in person, in those early days soon after the book was released, he said he wanted to thank me with a gift, in gratitude for my passion and vision for his book. The gift was not what I expected and you can read a full account of our ‘magical’ encounter in the preface of my book.

The magic gift he gave me was to change the course of the rest of my life and ultimately led to my writing The Secret of The Alchemist, which is my account of the deep and life changing spiritual lessons I discovered – including ‘the secret’ – buried within Paulo’s novel.

The immediate effect was amazing and was manifested through two distinct miracles. On the one hand, Paulo challenged me to decide what I really wanted in life, and once I made that decision, he said it would happen! I learned very quickly to be careful what you wish for because the first obstacle to success is fear. I wanted to start my own business and yet to achieve that I had to face my fear of failure.

As I began to dig for the secret buried in The Alchemist, I unearthed a new found courage to face my fear and follow my dream and within a short space of time I founded a successful advertising agency. But the road to that new found success did not come cheap - it required a complete transformation of my inner self. On the other hand, the effect was to restart an inner spiritual journey that I had put on pause for many years and led me to begin to value the uniqueness of what I had to offer the world – I found my inner treasure.

Most importantly, I discovered that alchemy is all about transformation toward true empowerment and it draws upon the greatest power of all to convert seemingly insurmountable obstacles into life changing experiences.

Our chances of successfully living our lives with true fulfilment are often hampered by any number of obstacles - visible and invisible. My best example of overcoming an obstacle to my living life to the full – and believe me there are plenty to choose from – is when I discovered my inner child in the cupboard of my unconscious. When I was a toddler, I had a real-life Harry Potter experience of spending time locked in an under stairs cupboard. The consequence was an angry and frustrated inner boy who was controlling my thoughts and emotions as an adult. His power was
so great that he had my life set on a path of self-destruction.

By using the process outlined in the ancient wisdom of alchemy, as interpreted by Carl Jung – another devoted alchemist – I found a way to give voice to the inner boy and give him the attention and love he had been denied. Slowly and gently I experienced a healing of the pain he had encountered and finally – instead of being an obstacle to my emotional progress he became my greatest asset. It’s that boy who became the writer I am today.

My greatest weakness became my most treasured strength. This is the power of spiritual alchemy and it is within reach of anyone looking for greater power and control over their thoughts, emotions and their life - and it requires one very special ingredient: the power of unconditional love. This is the experience of with the power of unconditional love – that surrounds me and is within me – leading me on to fulfil my dreams. This can be your experience too and to assist you in unearthing and believing again in your dreams I have made this blessing for everyone who reads my book:

“As you read The Secret of The Alchemist, I have asked the magical power of Love to give you everything you need to be the alchemist in your world.” Colm Holland.

You can view The Secret of The Alchemist on Amazon.

Thank you so much for this book review. It's come at a time when I've almost run out of books to read. I've ordered both books, because I've already read Paulo Coelo's Witch of Portobello and thought it was brilliant, so I know I won't be disappointed. Only this morning I put an item in my book of shadows about something from my early life that badly needs transforming to something positive, so the synchronicity of this is remarkable.
Jane M

I hope you enjoy them! Paulo Coelo's The Alchemist is one of my favourite books. I haven't read this new book analysing it yet, but I thought it sounded great too!