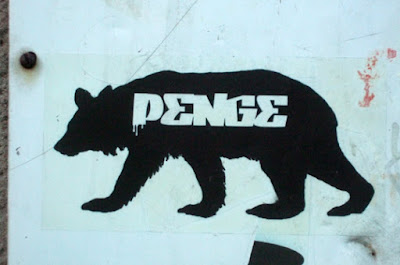 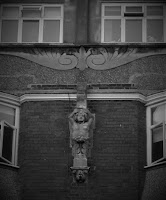 When you were young, did you play the game of not stepping on the pavement cracks, or the bear would get you? Here's a version of that game I played with a bunch of adult friends back in the summer of 2016.

Shortly after the launch of Pokemon Go, I decided to go on a monster hunt without the tech, using imagination and a spot of of psychogeography to look for signs of strange creatures - making up stories and taking photos along the way. Last week, I came across those photos again, and thought I'd share them in this blog post. The bear sign above was one of the first things I saw. There were several of them along the way. A warning perhaps, or just a creative expression by one of Penge's talented designers and street artists? I stood on a crack, just to see what would happen... 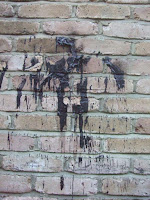 A row of bare-breasted caryatids appears to hold up the top floor flats of a building in Penge High Street, above a row of shops. You can see one in a photo above right. I don't know what they are doing in south London, but a caryatid is a statue that acts as a pillar or other support in a building. The name comes from an Ancient Greek term meaning "maidens of Karyai", which was an ancient town with a temple to the goddess Artemis Karyatis. She was said to dance among the groves of nut trees with her maiden worshippers, all carrying baskets of reeds and grasses on their heads, as if to mimic the trees themselves.

When you see faces in ink blots it is called pareidolia. What you think you see, isn't really there. It is just your mind playing tricks on you, translating random shapes into familiar objects - and perhaps giving a clue as to what is going on in your mind. Of course, that dark shape on the wall is just as random. Of course it is a paint splatter, interpreted by my imagination. It could not possibly be the shadow of a creature with the head of a lizard and outstretched wings, cast on a bare brick wall in an alley behind a supermarket. 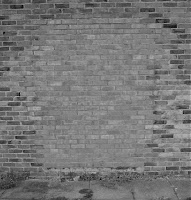 And a bricked up doorway could be nothing sinister, could it? As I was photographing the shape on the wall, a group of children approached me and the people I was with.

"Are you looking for weird things?" one asked.

"Yes," I said. We were. The children looked at each other, as if deciding whether to tell us a secret. One of them took the lead. If we listened to the wall by the bricked up door, we might "hear a scary voice", they said, in a whisper.

"What does the voice say?" I asked. 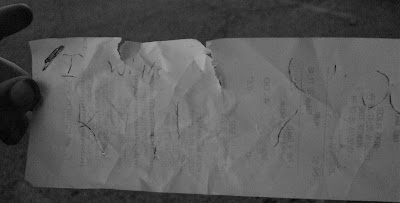 Leaving death threats behind, we returned to the high street. There was something odd there I was already aware of - a maze on the pavement next to a set of monstrous feet. Naturally, I walked the maze, but nothing happened. I don't think the maze is there now, and I believe the feet are gone too. I don't know where. 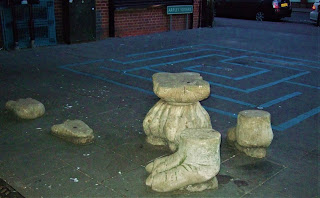 Other statues of mythological monsters can be seen in Penge. Some stand guard by Waterman's Square. These Victorian alms houses are now luxury homes, and the gargoyles that stand on pillars by the gateways inspired the logo for the Penge Heritage Trail. But, while they might have been intended as guardians, they looked mildly menacing as the evening shadows lengthened. 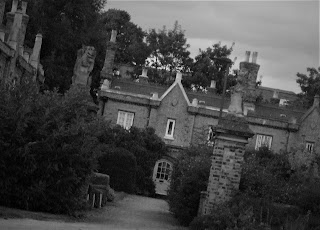 Along the road from Waterman's Square is St John's Church, and I think I spotted a small foliate head - or a Green Man - by the church door. These are often found in churches. Some are famous for them, including Salisbury Cathedral and Rosslyn Chapel.

There are many theories as to what they mean. Many pagans like to believe they represent the cycles of nature or even a nature spirit. Christians have variously interpreted them as showing the sins of the flesh leading to corruption or as Christ breathing life into the world. For others, they are just monstrous gargoyles, but no one really knows for sure.

As the walk went on, and dusk turned to night, the streets and alleys and deserted stretches of ground we crossed got distinctly spookier. The back of a disused pub next to Penge East Station is covered in murals showing the area in bygone times. It is meant to be a happy, nostalgic scene, but graffiti on the wall appeared to have added ghost-like images to the painted windows that gave a more haunted impression. We decided to end the walk there, and made our way to a pub that was still open for the kind of spirits that get poured into a glass. 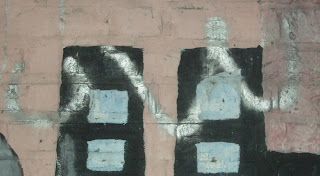 I hope you have enjoyed my little tour through a small part of south east London, and photographs of monsters from ancient mythology and pure imagination. If you see signs of strange creatures in the streets you pass, do take a picture.
Posted by Badwitch at 08:00

Third picture down reminds Me of a stylized Raven tattoo I saw on somebody in Glastonbury. (Town not festival) Made Me think of the Lady Morrigan. What do You Think?

Dave: Yes, I see what you mean. It could be a stylised raven.