Of Stones and Jam and Returning to Magical Practices


I had a quiet solstice. I celebrated a little at home and watched the livestreaming of the sunset and sunrise from Stonehenge. It was fascinating, but a bit eerie I thought. You could hear the wind howling and crows cawing - but it was also so empty. Whenever I have been to Stonehenge before it was full of people.

The cameras switched between a static shot of the stones, to a camera slowly being moved about, scanning over them, sometimes showing close ups of markings. Later on you could hear the sounds of distant revellers - presumably gathering in the fields outside the perimeter fence, but it was almost like hearing the ghosts of celebrants inside the stones in bygone years.

All of my Wheel of the Year festivities have been subdued this year. In fact, apart from a little candle magic, meditating, using my tarot cards and watching a few esoteric things via the internet, I've not been doing much witchy stuff since the start of the pandemic. 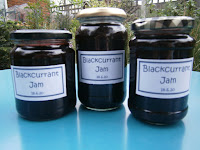 One of my friends, Jane Mortimer, said she felt similar. When we chatted by email, she said: "Being so cut off from the real witchy world has played havoc with my witchy mojo."

Jane has been more proactive about it than me, though. She said: "I've decided enough's enough. If the magick doesn't seem to be happening so easily, then I must make an extra effort to find it, so I decided to try and achieve something a little bit magickal every day, and the easiest place to do that is in the kitchen. Yesterday I made seven jars of blackcurrant jam. I'm starting again today with a kilo of plums - still bejewelled with ice from the freezer. Not only do we end up with a lovely supply of jam, with enough to share the magick with our neighbours, but there's now some space in the freezer for this year's fruit pickings, and with so much less pollution in the air, there's going to be a bumper crop!"

Doing a little something magical every day is a good idea - and kitchen witchcraft is a great way to start. I was inspired to go into my garden to pick fresh lemon balm to make lemon balm tea. Another witch suggested adding some rose petals from my garden too, so I might try that today.

What witchy things are you doing at the moment? Do leave a comment.
Posted by Badwitch at 08:00

I know just what you are saying , somehow I just can't get into anything , when really deep inside I feel it's a time when I really should be doing something.
Norm.

I've felt very meditative. It has been a stressful and thought provoking time. The other day my daughter was really feeling sad so I made her some magic breakfast. Mindfully made to banish negative feelings, she felt immeasurably better afterwards! ����‍♀️⭐ The best place for restarting magical practice is def in the kitchen.