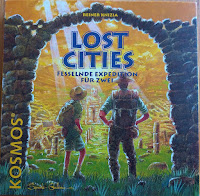 At the solstice last weekend I let my thoughts travel to ancient sacred sites, even though I stayed at home. Before watching the sunset and sunrise livestreamed from Stonehenge, I played a game called Lost Cities with my husband. It uses cards that represent journeys to ancient sacred sites, through the snowy Himalayas, Brazilian rain forests, Egyptian deserts, volcanic lands and under the sea.

Each set of cards is numbered from two to ten, with the images showing a progression in the journey. You start out on whatever adventure or adventures you choose, based on what cards you are dealt, but can only go forwards by playing higher numbers than the previous cards you have put on the table. At the end of each game you add the numbers, but deduct 20 for each journey started, so if you don't get very far then you might get a negative score.

It is fun, easy to learn, and used to be one of my favourite games. However, I hadn't played it for a few years before getting it out last weekend (I've been doing a lot of gaming during lockdown). I only have the first edition and last weekend I was struck by how uncomfortably colonial the artwork seemed: all of the pictures in my edition show white people.

Having now done a bit of research, I understand there is a newer version that shows more diversity, which is a good thing. However, I can't afford to replace my set really and throwing out something that is still usable seems too wasteful for an environmentally conscious witch to want to do.

Also on my shelf is a German game called Rettet Die Umwelt, which means Save the Environment. It has somewhat similar rules as Lost Cites, but instead of representing travel, the theme is that of reducing the pollution in forests, rivers and the air.

I like that game too, and the environmental theme is one likely to appeal to those following earth-based spiritual paths as much as the thought of visiting ancient sacred sites. It is also suitable for up to four players, while Lost Cities is only a two-player game.

Playing board games is one of the things I've been doing quite a lot at weekends during lockdown, and I've been blogging about those that have a particularly witchy or pagan theme. Some I've reviewed are Four Gods, Frog Juice and Once Upon a Time. You can view the newer version of Lost Cities on Amazon.