Lammas Lament: It Is Okay When Things Go Wrong 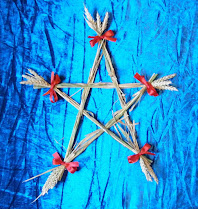 Jane Mortimer took these pictures of Lammas crafting she did for a ritual. Jane said: "We were asked to take seasonal offerings for the altar. I made a wheat pentagram, but it turned out too big and I broke some of the ends off trying to ease it into my wheely trolley. Luckily I'd already got a photo of it (picture left). I ended up taking a simple bunch of dried botanicals from the garden (pictured below), the teasel representing a harvest for the birds - it's their Lammas too!"
I think both of the crafting projects look great, but the message from the first breakage is that it is okay when projects don't work out quite how we intended. We often only get better at a skill by making a few mistakes.
I'll qualify that: it is really annoying when we have a great idea for a crafting project, spend time, effort and often money making the thing, but it ends up breaking or simply not being quite as good as we hoped. However, the next time we try, we'll be better at it. 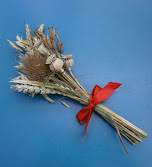 I know I can sometimes be put off attempting things from fear of failure. I even do that with writing projects, despite being a published author already. I can prevaricate with a blank computer screen and no words typed, even though I know the sooner I start, the sooner I'll finish.
The first draft of every book I've written was a bit rubbish. However, it is often less of a waste of time to dash out the first attempt quickly, then improve on that, than to delay starting until I feel more confident. As a friend who is an experienced writer reminded me recently, there's often a lot more perspiration than inspiration behind every best-selling book. It is the same with every artistic and creative project.
However, I think both Jane's pentagram and Lammas dried botanicals look lovely in the photos, and I'm delighted to see them and put them on my blog.
Posted by Badwitch at 08:00