The Rivers of London: An Old Photo and New Writing 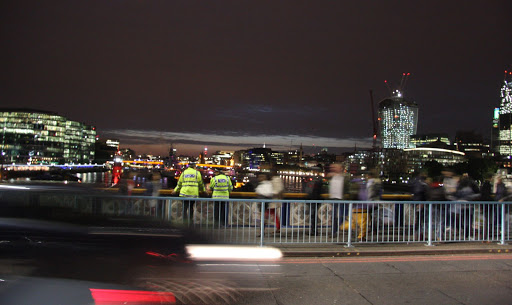 I took this night-time photo on Tower Bridge back in 2013, while on the ten pubs in ten hours Peter Ackroyd pub crawl, run by Minimum Labyrinth. Yesterday I came across it again by chance. Well, not exactly by chance. I was actually looking for a photo I'd taken of the archaeological remains of the old London Bridge. I didn't find that, but I found this - and it was even more perfect.

I was writing this blog post about something really exciting. I'm part of the team working on a new Rivers of London role-playing game being published by Chaosium, based on the brilliant urban fantasy books by Ben Aaronovitch. They are set in London and the main character, Peter Grant, is a police officer who is also a wizard. The rivers are goddesses - including the Thames, because Old Father Thames moved upstream of Teddington Lock in the Great Stink of 1858. The role of Mother Thames was granted to a Nigerian woman who migrated to London in the 1950s. As she contemplated suicide on London Bridge, after a failed career and broken romance, the river offered to take her pain away and make her a goddess.

The first books in the series are set around the time I took that photo. PC Grant's partner is a female officer, Lesley May. Looking through my old photos last night, that one jumped out at me as being serendipitous. Those two police officers are the part of picture that are quiet still and in focus. They are looking out over the Thames and the lights of the City while traffic and people move in a blur around them. I'd like to imagine they are Peter and Lesley, come to life as if by magic from the pages of fiction.

You can view The Rivers of London novels on Amazon.

Just discovered your blog looking for new Pagan blogs to follow and what do you know I see news about the Rivers of London Game that I am way excited about.

Thank you Eva! I'm pretty excited about it too :)