Book Review: In Search of the New Forest Coven 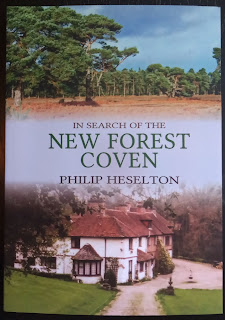 In Search of the New Forest Coven is the book that should resolve arguments about whether Gerald Gardner was really initiated into an existing coven of witches, or whether Wicca was entirely invented by him. It also goes a long way towards clarifying whether Wicca is a survival of an ancient Witch Cult, or a new tradition that borrows from the past.
Wiccan historian Philip Heselton has spent many years researching the backgrounds of a group of people who Gerald knew, who had esoteric interests and lived in and around Highcliffe, on the edge of the New Forest, in the early to mid 20th century. Those people were: Edith Rose Woodford Grimes ('Dafo'); the Mason family; Dorothy St. Quintin Fordham ('Old Dorothy'); Katherine Louise Oldmeadow; Catherine Chalk; Mabel Besant Scott; Elsie Begg; Irene Lyon Clark; and Rosamund and George Sabine. Chapters go into each of their histories, looking at where they lived and what they did in their mundane lives as well as their occult and witchcraft-related backgrounds, and how and where they would have met.
Philip writes: "Initially this was not a group who met, but a network or very loose grouping of people with esoteric and other interests." The group included a teacher, an astronomer, a prolific writer of fiction as well as being a herbalist, and a trained singer and songwriter. Their esoteric backgrounds included membership of the Golden Dawn, Co-Masonry, Theosophy, Druidry, astrology, and yoga.
Philip adds: "They weren't all witches and they didn't all become witches. Some were on the fringe." Dorothy was one on the fringe, although the group used one of her properties for witchcraft rites. However, "That Rosamund thought of herself as a witch by the time she encountered Katherine Oldmeadow is shown by Katherine's change of attitude to witches [in her novels]."
Rather than any of them being initiates into an unbroken tradition of an ancient surviving Witch Cult, Philip writes that they might have "had memories of previous lives as witches, and/or had the idea that they might have had witch ancestry." Nevertheless, they conducted their own initiation ceremony, in which Gerald Gardner became a member of the New Forest Coven in 1939. He then went on to popularise Wicca and bring it to the rest of the world.
In Search of the New Forest Coven is a book that everyone who is interested in the history of modern pagan witchcraft should read. It is meticulously researched and answers so many questions about the ancestors of tradition for those who call themselves Wiccan.
You can order copies from Fenix Flames at £14.99 for a paperback and £21.99 in hardback. You can also view on Amazon the Kindle version of In Search of the New Forest Coven. Philip's earlier books include Doreen Valiente - Witch and Witchfather - A Life of Gerald Gardner.

I'm just over halfway through this book, and though I'm finding it hard to absorb the wealth and depth of detail about each person involved, as well as their homes, occupations, locations and travels, I can't seem to put the book down! It's as if something is telling me I absolutely must read this book if I'm to understand where Gerald Gardner is coming from, and the true origins of Wicca. Having said this, it's not a difficult read. Reading it is a bit like being a fly on the wall, nosing into everyone's lives, and I'm afraid if I skip through it I might miss something very important!

I agree it is hard to remember all the details about everyone. I kind of didn't mind forgetting the bits about their mundane lives though.