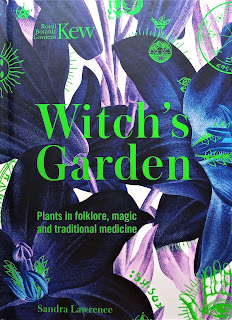 Witch's Garden is the title of gorgeous new book published by the Royal Botanic Gardens, Kew, full of fascinating information and pictures of plants in folklore, magic and traditional medicine. It is published today, but I was lucky enough to be sent a review copy a few days ago. I've thoroughly enjoyed reading it, and I've learnt a lot.

Did you know that according to folklore only a witch or a rogue can successfully grow the common herb parsley? That must be why the pot on my kitchen windowsill is doing so well, while other herbs there struggle. Apparently, if you aren't a witch, the best way to get it is to steal it. It can also be used in a curse: speaking someone's name aloud while picking it is one way to wish their death. So, better not piss off anyone who's planning a nice sauce to go over some fish...

The Witch's Garden describes more than 50 magical plants, the myths surrounding them, their uses in traditional herbalism, and ways they've been used for magic. Those included range from ordinary kitchen herbs, like parsley, to calming St John's wort, to the famously witchy mandrake. The book also looks at magical theories, including gardening by the moon and stars, and the doctrine of signatures, which is the ancient idea that plants that look like a body part have the power to heal it. There is oodles of information on wise women, apothecaries, witches and herbalists through the ages, and how they cultivated and employed plants for their apparent mystical properties. As the blurb at the back says it included: "tales of remedies for everything from bad weather and broken hearts to protection from evil and the invocation of immortality." 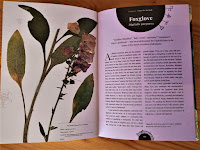 What I really like about Witch's Garden is that, as well as being full of historic plant lore, it is lavishly illustrated. Each spread has pictures, and most of the images are paintings from the Royal Botanic Gardens' archives or photographs of dried flowers from the Kew Herbarium. The picture to the right shows the pages on foxglove, including Kew's herbarium sheet.

The author, Sandra Lawrence, is a friend of mine and I can vouch for the fact that she has a magical garden many witches would be envious of. I know I am. I've often sat there with her on a summer evening, discussing folklore, while enjoying food and drink she has prepared from fruit, vegetables and herbs she has grown there. She really knows her stuff when it comes to herbology. She has also written books on mythology, monsters, heroes and festivals and you can view her author page on Amazon.