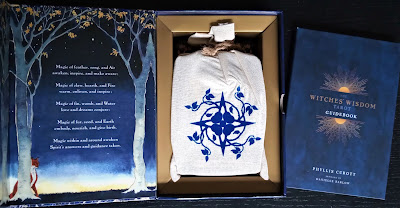 Everything looks gorgeous in the new Witches' Wisdom Tarot, by Phyllis Curott and Danielle Barlow, which is officially published today. Opening up the set for the first time is like delving into an enchanted box of secrets. It is beautiful inside and out, with magical words and art on the packaging, as well the cards, a quality guidebook and a natural hessian bag to keep them safe.

I also absolutely love the artwork on the cards, which drew me to want to use them immediately. Just look at that pathway of mushrooms leading into a forest on the Ten of Earth Card and the lush Ace of Water. This set offers a re-imagining of more traditional decks. Phylllis and Danielle minimised a lot of the Qabbalistic and Western Esoteric symbolism found in Rider-Waite-Smith style decks, and used visualisation techniques to find inspiration from the natural world for all of their cards.

The suits are tied into the elements rather than swords, wands, chalices and pentacles, which isn't that unusual. Court figures have been replaced with messengers, witches, craftsmen and goddesses, and the major arcana have been reversed, with some cards replaced entirely. Now, the first card is the World and the final card is the Pilgrim. Death has been replaced with Rebirth and the Fool is the Pilgrim. Rearranging tarot cards in this way is pretty brave, but I think it works. There are instructions for using the cards in their older sequence if you prefer.
Publisher Hay House is known for producing tarot sets with gentler messages than those traditionally found in the Rider-Waite-Smith. The Witches' Wisdom Tarot is interesting because it aims to provide positive messages, while at the same time the artwork packs a real punch in showing the hardships of nature and the destructions caused by man. For example, Five of Water shows a starving polar bear on melting ice while The World depicts a refugee leaving a burning city with their possessions on their back.

Environmental and social messages run throughout the descriptions and interpretations offered. My one criticism is that the wisdom and counsel offered could go further beyond that nuance. However, the authors also encourage those using the cards to find their own meanings within the artwork, and it is certainly rich enough. The book describes techniques for guided visualisations, journeying and invocations to develop your own relationship with each card. Personally, I may well do that, although I tend to use an intuitive approach to readings rather than rely on official interpretations anyway. The book also offers spells you can try, which really adds to the set's versatility.

Publisher Hay House says the deck is: "a doorway for everyone who wishes to encounter the Sacred - in realms of Spirit, embodied by Nature and residing within our hearts." I think that's a good way of describing it. I love this deck and I've been using it every day since I got my review copy. I know I will continue to use it - and explore the journeys the artwork invites - for a long, long while. This is the best tarot set Hay House has produced in my opinion.

You can view The Witches' Wisdom Tarot on Amazon.

Thank you for this thoughtful and kind review. So very glad the deck is speaking to you. We journeyed, sometimes multiple times, for every card and were true in words and image to the what we were shown and taught - one reason the deck and the Pilgrim are s racially and culturally diverse. The reversal of the Major Arcana was what happened when we journeyed and it makes perfect sense for a Witches' deck - we move into the world, not away from it, to discover the Divine embodied by Creation, and by each and all of us. That's where the magic comes from! Thanks againBlessed Samhain,The reversal of the