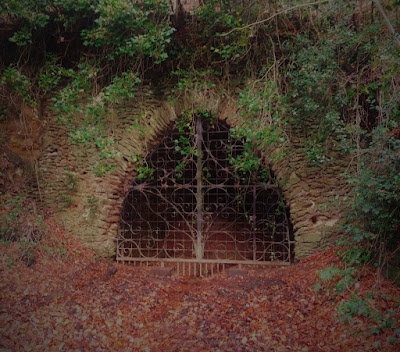 This photo of Mother Ludlam's cave, on Moor Park Lane, Farnham, in Surrey, was taken by Bekie Bird. The cave was once the site of a healing spring, but has also long been associated with tales of a witch called Mother Ludlam who was said to live there. According to legend, Mother Ludlam was a good witch who would lend people cooking utensils. However, one person borrowed her largest cauldron but didn't return it.

Now, pissing off even a good witch isn't a smart move, and Mother Ludlam got pretty angry. The borrower, rather than return the cauldron to the witch, took it to the local church. Nearby Frensham Church does have a large copper cauldron, which some say is the one from the tale. Historians think it was used for to have been used for brewing beer in medieval times. Another legend says the Devil  stole Mother Ludlam's cauldron, while yet another says that the cauldron originally belonged to fairies.

Bekie co-hosts The Witching Hour on the Witches Inn YouTube channel, with Heather Wood. The witchy show is every Wednesday at 8pm and is free to watch.

The photo is copyright Bekie Bird.

Thanks Lucya - it was a smashing day out!