The Evening of the Nineteenth Day by Mael Brigde 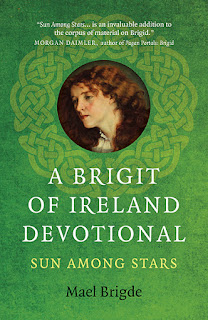 Here is a post by Mael Brigde, author of Brigit of Ireland Devotional. She wrote these words yesterday evening, about the nineteenth day of February:

It’s been nineteen days since Óiche Fhéile Bhríde, the evening before Saint Brigit’s Day (Imbolc), and life has quietened down substantially at last. For me, a long-time devotee of Brigit, the activity grows greater and greater in the two months before that evening, peaks for another week or two, and finally begins to slow. There is a newsletter to prepare for the Daughters of the Flame, my Brigitine flame-tending order, renewal of our annual commitments, poems to publish in honour of Brigit, events to boost on her general interest blog, and so many offerings of ritual, contemplation, and discussion this year, with everything moved online. Because I have a devotional book of Brigit coming out, I had the opportunity to be interviewed a couple of times, and to talk with the Irish Brigidine, Sister Mary Teresa Cullen, at one of those events. What a great pleasure that was.

So much was happening I could not keep up. But I sailed along on the tide of appreciation of Brigit that was everywhere for a while.

It was a very different Imbolc than most, for me. Newsletter sent out well ahead, flame-tending shifts accounted for, by Óiche Fhéile Bhríde there is usually just me and Brigit. I make her bed, cook for us, pour cream over the threshold and invite her in. Quiet, simple; the most joyous night of the year.

This year, while being so very busy online, I wasn’t alone at home. An issue with my back sent me to hospital and I’ve been recovering with friends ever since. I couldn’t drive, could hardly walk, couldn’t cook, and my candles, my brídeóg – none of the tools of ritual were here. So in between the flurry of Imbolc greetings and readings and events, I sat on the chair in my borrowed bedroom and gazed out the window at the darkened sky, and spent time with her. In my mind, I made her offerings of cream and colcannon and her cozy bed. In my breath, I steadied myself and moved away from the flurry of eager, thoughtful talk. In my heart I brought myself closer to her. And the following day, Lá Fhéile Bhríde itself, the pace picked up again.

In the Daughters of the Flame, we have three cells of nineteen women each (and one cell of one woman, but that’s another story). On the twentieth day, Brigit tends the flame. We received this pattern from Giraldus Cambrensis, a Romanised Welsh cleric who travelled with the future English King John in Ireland in the late twelfth century. He wrote the only testament we have to the Brigidine sisters tending Brigit’s fire.

As in the time of St. Brigit twenty nuns were here engaged in the Lord's warfare, she herself being the twentieth, after her glorious departure, nineteen have always formed the society, the number having never been increased. Each of them has the care of the fire for a single night in turn, and, on the evening before the twentieth night, the last nun, having heaped wood upon the fire, says, “Brigit, take charge of your own fire; for this night belongs to you.” She then leaves the fire, and in the morning it is found that the fire has not gone out, and that the usual quantity of fuel has been used.

It struck me, as I sat down to write this post, that in a way we have all – well, certainly I have – been playing the role of all of the sisters of Saint Brigit this month. We have tended the flame of her devotion every day in so many ways. And now, today, the nineteenth day since Óiche Fhéile Bhríde, I am looking over the edge of the twentieth day and realising that on that day, that day which has already begun, I can leave the work to Brigit. I can rest, knowing we have heaped much wood upon her fire, and she will watch over it as it burns.

I say to you, my saint, my goddess, “Brigit, take charge of your own fire; for this night belongs to you.”

Mael Brigde is the founder of the Brigidine flame-tending group, Daughters of the Flame. She publishes two Brigit blogs, Brigit’s Sparkling Flame (general interest) and Stone on the Belly (poetry). Her Brigit classes are available through the Mystery School of the Goddess, and her book A Brigit of Ireland Devotional – Sun Among Stars will be released by Moon Books on 27 August 2021.