Is the Image of a Witch in Stripy Stockings Offensive? 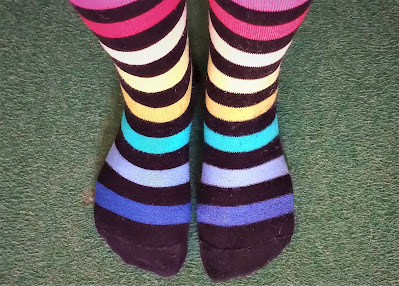 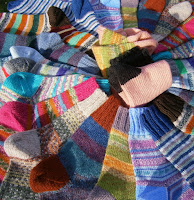 I love wearing stripy socks, and I'm not alone. My friend and fellow witch Jane Mortimer enjoys knitting them, while author Sheena Cundy deliberately chose them in the images for her excellent The Madness and the Magic series of novels. There's also other Witch Lit out there depicting magical women in similar patterned leg-attire.

However, someone I know was told that stripy stockings were considered offensive stereotyping. She said they shouldn't be worn as part of a witch's attire. I must admit I was a little surprised, and I wondered what others thought. I also did a tiny bit of research.

Stripes did appear on stockings as far back the 17th century - usually a band of stripes at the top forming a garter. I've heard suggestions that wearing them was considered somewhat risque at the time. However, stripes for socks really only became a big thing in the early 20th century as sportswear in team colours.

As far as I know, the image of witches as wearing stripy stockings was popularised by the 1939 film The Wizard of Oz, when the Witch of the East's legs are shown sticking out from under the house that crushed her. She is wearing stripy stockings and ruby slippers. I've heard suggestions that the connections with stripes and witches might go back earlier than that, but not found any definite sources.
From the mid 20th century, both striped socks and stockings went in and out of regular high-street fashion quite apart from anything sporty, saucy or witchy. A Halloween costume consisting of striped legwear, a black skirt and a pointy had will definitely implies witch, but is it offensive?

What do you think? Are striped stockings on witches cute or insulting? Does it depend on the circumstances? Would you wear them? Do leave a comment.

You can view The Madness and the Magic on Amazon.

The pictures show me in my own stripy socks (top), Jane Mortimer's hand-knitted socks and the cover of the first book in The Madness and the Magic series.

I love stripy stockings and wear them a lot.

Pointy hats, cloaks and long frocks are also part of a witch's attire. Are these offensive? Nah!!!

Since I wear my everyday 'street' clothes...everyday...the socks would have to match the outfit...62 years and the only time I have donned the 'hat, cape, and socks,' was for a Halloween bash. I agree with anonymous...What do witches wear?...Whatever they like!! That aside I do seem to have a number of 'striped'socks to coordinate with my outfits...uhmmmm!?!

Does it make a difference to the power of the spell whether the stripes run horizontally or vertically? Are thick or thin? Are in colors that clash? Are indicators of particular Trads or Affiliations? Remind us of Earth, Planets, or Stars? Are favored by the Witch Herself for Her Own Reasons and Pleasures?

Pitch313 - I don't think there's any particular uniform in relation to stripy socks/stockings and traditions of witchcraft. I have heard that some traditions wear garters that symbolise their membership of the group, also some groups have emblems - necklaces, pendants etc - but not sock stripes. If you know of some relationship between particular traditions and particular stripes in socks, then do let me know.

Definitely not offensive. I love stripy socks. I believe witches as a whole are least likely to be offended by stereotypes and rather, tend to embrace them.

Stripy socks/stockings offensive? Curse you witch, I’ll wear what the FFFF I want! Now that’s something offensive for The Offended to consider…

Am currently wearing my red-and-white striped pantyhose together with my sturdy red boots - all part of my witchy dress (together with skirt and top and pointy hat) to commemorate the delightful Nanny Ogg (of Discworld fame). If wearing striped socks as a witch is offensive, I think Nanny Ogg would have a word or two to say about that. Rock your socks, sister! And brothers too of course, or any gender (or no gender at all) for that matter.

Offensive to who? Real witches?

Yeah, that was the comment I heard - that it was offensive to real witches. Hence my post questioning that.