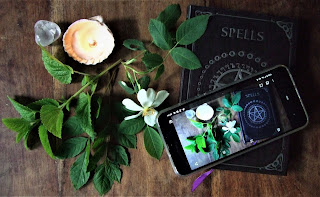 I’m not a TikTok witch, but I think everyone’s been doing things online more this past year – including witches. And what’s more, witches and witchcraft have become increasingly fashionable. I’ve seen a lot of threads on social media discussing whether this is a good thing or a bad thing. In this post I’m not going to tackle the subject of newcomers to the craft – or “baby witches” as the trending phrase seems to be – and how best to introduce them to real witchcraft rather than the TV version. That’s for a later post. What I’m going to be blogging about today is a few of the witch-themed things like TV programmes and games that are driving the fashion.

I’m sure anyone likely to read this post is aware of the hugely popular Chilling Adventures of Sabrina. The American series about the teenage witch Sabrina Spellman was based on an Archie comic book series of the same name, which also inspired the earlier 1996 series Sabrina the Teenage Witch. Sadly the recent version only ran to four seasons before being cancelled, but you can still find it on Netflix. I must admit I really enjoyed it, although opinions on pagan social media groups are usually divided. The issue is that Sabrina is a Satanic witch rather than a pagan. Some people feel this gives newcomers the incorrect idea that real-world witchcraft is about worshipping the devil and cursing rather than celebrating the seasons and doing healing spells.

More recently, WandaVision came to Disney+. This is based on more magical characters from comic books: Wanda Maximoff, or the Scarlet Witch, and her partner Vision. This takes inspiration from 1960s TV sitcoms I Dream of Jeannie, about a genie living in 20th century America, and Bewitched, about a witch who marries a mortal and tries to be a suburban housewife, but using a little magic to solve everyday problems. I don’t want to give away too many spoilers, but WandaVision also has an appearance by another witchy character.

I’m not really a gambler, but my fellow blogger Alex pointed out to me that the world of online casinos has been booming lately, and one surprising theme we can see pop up in them is magic! While it’s no surprise to see that classic table games like Poker, Roulette, and Baccarat do well on these websites, the popularity of magic and witch-themed slot games was somewhat of a surprise. You can take a spin on this site, and give these fan-favorite modern games a try right now.

It seems that everyone wants a bit of magic in their life in one way or another and themed slots do an excellent job of giving it to them. While we can’t miss that many of these themed slots take a silly approach to the witch trope, it’s still nice to see witches not depicted as terrifying monsters. These action-packed games incorporate the witch theme into gameplay by adding symbols like cauldrons, spell books, and hats, along with mysteriously haunting music.

I’m going to be blogging more about Witchcraft online in the future, but in the meantime, do leave a comment about your own favourite witches in popular media.