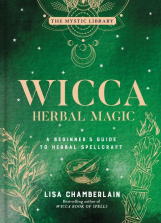 This month, Sterling Ethos is publishing two magical guides from Wiccan author Lisa Chamberlain. They are Wicca Crystal Magic and Wicca Herbal Magic, both in the Mystic Library series. They are aimed at anyone who wants to learn how to use these gifts of the Earth for spells, elixirs, and charms. Here is a short extract from Wicca Herbal Magic.

The Magical Power of Plants

If you think about it, herbs may be the most powerful magical tools of all. A living plant is a direct conduit of the Earth’s energy. Plants are among the earliest known life-forms on Earth, appearing well before the evolution of human beings and even most animals. The arrival of plant life transformed the landscape of Earth and contributed to the creation of its atmosphere. In other words, plants are master manifestors! Furthermore, human civilization could never have arisen without the plant kingdom, as stone buildings gave way to houses made of wood, and people learned to make other key tools, such as rope and clothing, out of the plant life available to them. Yet plants have never simply been ours for the taking without consequences. Over the last several decades, we have witnessed the plant kingdom's crucial role in our well-being as a species, as the massive deforestation of the planet and the resulting imbalance of carbon dioxide in the atmosphere wreaks more and more havoc on our global climate. Taking the long view of Earth’s evolutionary history, it's evident that we need plants much more than they need us, and this fact alone should earn the plant world our utmost respect.

Looking through the lens of magic in the Western Mystery Tradition, we can see that plants literally embody the power of the four classical Elements that work together to create and sustain life. They begin their growth cycle as seeds in the soil of the Earth, where the minerals needed to sustain their life are found. (While it’s true that some plants actually grow in water, it’s the presence of minerals—derived from the Earth—in the water that allows them to grow.) When plants die, they return to the soil to nourish it in turn so that new plant life can flourish. Plants interact with the energy or “fire” of sunlight, which makes the process of converting carbon dioxide and water into oxygen possible. This process, photosynthesis, directly affects the quality of the air. Air, in the form of wind, fosters plant life: wind stimulates the growth of stems and leaves as well as carries and scatters seeds in order to continue the cycle. We all know that plants need some amount of water to live, even the hardy cactus, but many people are unaware that plants also play a crucial role in the regulation of the planet’s water cycles by purifying water and helping to move water from the soil to the atmosphere. Indeed, there is perhaps no better illustration for how the Elements of Earth, Air, Water, and Fire come together than in the magical existence of plants.

Furthermore, this interconnected relationship with the Elements goes on to directly nourish the human body, which must have plant life to survive and thrive. Even those who eat mostly  meat and very few fruits or vegetables are ultimately surviving on plants, as this is what sustains the animals they eat! We can say with confidence that all human beings, whether they are aware of it or not, are dependent on a magical system that harnesses every life-sustaining force in the Universe. And those who are aware of this magical system can gain even more benefit by consciously using it to manifest positive changes in their lives.

You can view Wicca Herbal Magic on Amazon and at publisher Sterling Ethos' website.  I will be posting an extract from Wicca Crystal Magic in the next few days.
Posted by Badwitch at 08:00