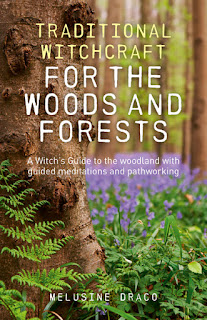 Here is the first of two excerpts from Traditional Witchcraft for Woods and Forests by Melusine Draco, which I've been given permission to share. The book is witch’s guide to the woodland with guided meditations and pathworkings. This section is about woodland walks.

Hunter’s Wood is a dreamscape that a witch can visit at any time, should we feel the need to harness the timeless energy of the Wild Wood, regardless of time or season. For visualisation purposes, the Wood is approximately ten acres in size, flanked by a fast running stream to the east and a long ride, or track, to the west. A ride is a treeless break in forested areas used in ancient times for the hunting of deer - hence the name of this wood. The stream feeds a woodland pool with a slow trickle during the summer months, but when the winter rains come all the accumulated dead leaves and twigs will be swept away by the torrent. The southern edge of the wood opens onto a huge cornfield, in the centre of which is a large mound, crowned by a stand of three Scots pines; while to the north there is a wide expanse of marshy heathland with its alder carr. Narrow paths criss-cross the wood: some are old and man-made, others are animal tracks, but all will lead us deeper into the woodland realm.

This Wood is old. It has grown old alongside humanity and bears the evidence of its passing; generations of witches have wandered in secret glades, gathering herbs and plants at the midnight hour. Near the woodland ride, we discover other signs, particularly in the shapes of the trees that tell of the history of the wood and what it has been used for. The word coppice comes from the French, couper, meaning ‘to cut’ and the most obvious signs of past coppicing is the presence of ‘many-trunked’ trees growing on the site of old coppice stumps. It was also important in past times to keep livestock out since they would destroy the young shoots and so the area was surrounded by a ditch with a large bank inside, which was often fenced. Old woodland may also have the remains of a stone wall used to protect the coppiced area. In Hunter’s Wood, the remnants of the bank and wall can still be seen where the ruins of the charcoal burner’s cottage disappears under a tangle of briar and bramble. 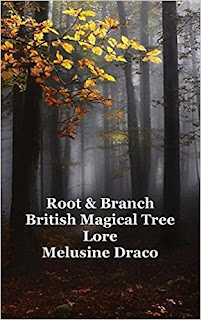 A witch should know that the efficiency of the woodland’s eco-system depends on how much of the sun’s energy can be utilised by the green plants and converted into carbohydrate. The tallest trees of the wood, which form the ‘canopy’, are the first to receive the sun’s rays and what grows beneath this layer depends on how much light can filter through to be tapped by other more lowly plants. In beech woodlands, there is very little, but oak and ash are relatively light shade-casters and a lush growth of plants can exist beneath them. Immediately beneath the canopy will be tall bushes and small trees, which form the second or ‘shrub-layer’ of the wood.

Growing beneath the shrub layer is a mass of herbaceous plants that form the ‘herb layer’, so vital to a witch’s traditional wort-lore. Many of these plants come into flower early in the year, or have developed large flat leaves to make the most of what light is available. The lowest layer of all is the ‘ground layer’ of mosses and liverworts, which remain green throughout the year and are actively growing even in winter.

Another clue to woods that were once coppiced is the abundance of spring flowers. The regular tree cutting allowed plenty of light to reach the woodland floor and this encouraged the growth of the plants. Woodland flowers are slow to spread and so their presence in large numbers is an excellent indication that the wood is ancient; bluebells spread very slowly on heavy clay soils, so a carpet of them under trees could also be the clue to old woodland. Primroses, violets and wind-flowers are found here - all part of the medieval witch’s medicine chest. Wild flowers also provide the woods with some of their most attractive features. Because many have adapted naturally to flower before the leaves develop in the shrub and canopy layers, they are regarded as the harbingers of spring. No doubt to our hunter-gatherer ancestors this reawakening of the woodland contributed to the mystical significance of the many rites and rituals associated with the season. A further indication of an old wood is a rich variety of flowers, particularly if bluebells, snowdrops, wood anemones, primroses, yellow archangel and early purple orchids are present. Dog’s mercury may seem to be a common woodland plant yet it is rarely found in recently planted woods - that is, woodland that has formed in the last 100 years - and so is also a good indicator of old woodland. The presence of such flowers in a hedge also suggests that it originated as part of a wood, since these species do not readily colonise hedgerows.

The deeper we penetrate into the Wood’s interior we come to the denser shade of a holly thicket and even on the brightest summer’s day, little light filters through the overhead canopy. This part of the Wood is imbued with a strange atmosphere and, as in so many natural places that people have left alone, a witch enjoys the frisson of nervous wonder. The woodland floor is bare except for dried prickly leaves and a scattering of boulders covered entirely in the rich velvet green of a variety of mosses. Here the stems and branches of the holly trees are almost pure silver-white, not the dingy pewter colour of urban trees – and the holly possesses magical protective powers that can be used in amulets and talismans.

Nearby we find an old beech tree that is so hollow it is amazing the blasted trunk can support the massive branches and rich canopy. This once handsome giant of Hunter’s Wood is coming to the end of its life but each year it sprouts the delicate veil of green leaves that tells us spring is well and truly here again. In the folds of its hollow trunk, we can shelter from summer showers; eat beechnuts in the autumn and remain safe and dry as the winter snow drifts down through the branches. Whenever we pass this way, we greet the old tree as though it were a friend and hope it survives the next winter’s gales.

You can view Traditional Witchcraft for Woods and Forests on Amazon. It is is published by Moon Books Melusine Draco is also the author of Root and Branch: British Magical Tree Lore, published by Ignotus Books.