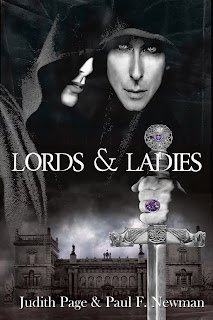 Here is an extract from the magical novel Lords and Ladies, by Judith Page and Paul F Newman:

The temple door was wide open, but the space empty. Nico slowed her pace and strode about imagining having this temple to herself. No more playing consort, no, she would be High Priestess. She approached the altar and the magnificent scabbard resting there. The jewels set into the leather erupted into life each time a burst of intermittent light crossed over them. She didn’t hear the sliding of the stone slab closing over the void, nor did she hear Morgana step up behind her.

‘What want you here?’ asked Morgana, picking up the scabbard and inserting the sword into it.

‘I could ask the same of you…Morgana,’ Nico said angrily.

‘This is my domain,’ Morgana retorted, replacing the sword and scabbard reverently back on the altar. ’Be gone, I have much work to do.’

A strange dampening silence fell over the mansion.

Nico adamantly stood her ground. Her anxiety replaced by bravado. Morgana sensed this and her body stiffened with irritation. No one ever crossed her.

Nico raised her hand in defiance in front of her. Morgana laughed and grabbed at Nico’s wrist, twisting it until it burned. Nico squirmed in pain, trying to suppress a scream.

These last words echoed around the chamber and reached the ears of another, Jessica, who stood in the doorway, a look of complete astonishment on her face.

‘You…you are Morgana?’ she uttered in disbelief. ‘My God…I should’ve guessed you weren’t Cressida. So…she’s dead.’

Morgana dropped Nico’s hand, leaving her rubbing it as it smarted.

The three women manoeuvred about the space finally gravitating to the altar. As they positioned themselves around it, not once did they take their eyes off one another.

As if reading the others’ minds, each of them placed their open palms on the cold surface, knowingly charging it. Their chests swelled as they inhaled great lungfuls of air. Breathing in concert they began to chant, voices rising in harmony despite their differences.

Morgana took stock of the situation, realising that this was all meant to be. But wait, she thought, Am I not the High Priestess of the Old Religion? Are we who are gathered here the main servants of the Triple Goddess? If she intended going on into the future realm, she need not go on alone. She would have sisters.

The walls of the temple hummed in response to the women’s chanting. The sound also reached the caverns below exciting the beast held within.

Morgana spoke loudly, ‘I am High Priestess of the Triple Goddess. It has been said, that…,’ inexplicably she faltered, she swallowed hard, there was a mournful choking as she finished her words, ‘I am last of my kind.’ Defiantly she glared from one to the other, holding Nico and Jessica’s gaze.

‘Hecate,’ both women said in unison.

‘Who be she?’ Morgana knew the gods through different ancient names.

The air rippled around the altar. Morgana shook her head ‘no’.

The door of the temple slammed shut. Around the sword, flames ignited. Jessica grabbed it quickly, only to have it snatched away by Morgana who slammed it into a resting place on the wall behind her.

The flames rose and burned higher and hotter, the heat reddening the faces of the three women. Hooded female figures rose from the fire as the flames turned purple and cool yet still whipped and thrashed like hungry searching tongues. The three earthly soothsayers stood tall and proud, locked in place unable to move away from the altar. Was this was their destiny to be the Three Queens who once bore Arthur by boat to Avalon? Was this their calling, in recognition for a lifetime of service to magic?

The essence once held exclusively by Morgana was being equally dispersed. Their training from birth would enable them all to interpret the will of the gods; they would be the mouthpiece of the Triple Goddess whose power floated on high before them. Each woman received an individual message.

Nico looked up at one of the hooded figures, linking with her, and said, ‘I am Omnipotence. I have infinite power and as an essence I am able to do anything I choose.’

Jessica was next to speak, ‘I am Omniscience and being an immortal, the Triple Goddess knows all and everything there is to know.’

Morgana, feeling slightly diminished, was last to speak. As the goddess stared down on her, the ancient witch claimed rebelliously, ‘I am Omnipresence. I. I am the Triple Goddess who sees all and everything that happens in the universe.’

Behind the echoes in the temple room a knocking had started up on the outside door. It increased to hard banging and shouting from without. The women ignored this and continued the ritual of transformation.

The Triple Goddess separated herself and came down one by one bringing the flames that had engulfed the women at the altar. The once scorching tongues cooled and rested as watery pools around their feet. The waters of the Cauldron held the Goddess’ powers and only their touch could heal those who had been bound with dark magic.

Each part of the Great Goddess embraced a priestess, imparting more mysteries of the Old Religion to them. Even Morgana learned more.

Beneath their feet, Althusa the white dragon, shrieked and roared, thrashing its white pearlescent body against the dark cavern walls. As it wrenched at its chain, fire belched forth from its nostrils turning the metal to a molten mass. The chains of bondage snapped! Althusa was free. He flapped his once useless wings and was away, clattering heavily through the narrow passages, breathing fire, until he came to a broken wall at the head of the cave. The full moon lit the scene, whitening a pathway over the sea and sending slivers of silver over his magnificent body. Althusa launched into the fresh night air, whirled and swirled in ever increasing circles and soared up, up into the heavens. An onlooker on the coast would have seen a strange silhouette pass over the moon as the beast’s triumphant cries faded into the stars.

You can view Lords and Ladies on Amazon.

Email ThisBlogThis!Share to TwitterShare to FacebookShare to Pinterest
Labels: books