Fruit: Plums or Damsons from a Wild-Seeded Tree 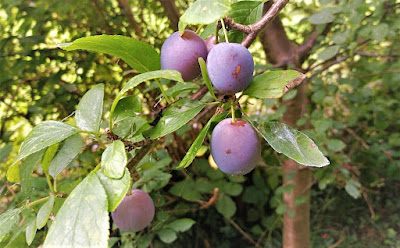 A few years ago I noticed a tree sapling growing next to my garden hedge. From the leaves, it looked as though it was a fruit tree, although I wasn't entirely sure and definitely didn't know what it would bear. Anyway, I left it to grow to see what would happen. Well, it got tall and this year, for the first time, its branches are laden with purple fruit. 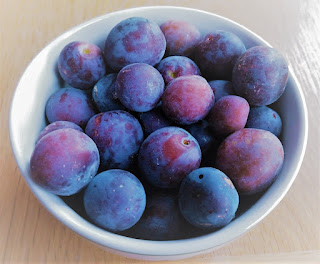 I'm not entirely sure if they are plums or damsons, although I suspect the latter. Damsons are actually a subspecies of plum but are a bit smaller and taste sharper. They are best cooked rather than eaten raw for that reason, but are wonderful in crumbles, jam, chutney, and soaked in gin or vodka as a Yuletide drink. Damsons freeze better than plums too. Plums and damsons are among the last of the soft fruits to harvest. They are ripe from late August and into September. The ones on my tree are only just starting to be ready for picking, but I cooked the first bowlful a few days ago and they tasted lovely.
According to Rachel Patterson in A Kitchen Witch's World of Magical Food, plums are considered an aphrodisiac. Use them in spells for passion, or serve them to your beloved for an immediate response. Mind you, my husband said the most immediate response he got from eating them wasn't quite that, so maybe don't overdo it! Both plums and damsons are certainly good for you in general, however, as they are full of vitamin C. They're also good food for wildlife including birds, insects and other creatures.
Damsons, like plums, are an ancient fruit. The name apparently comes from Damascus, where they were found by those on the Crusades and brought to England. While the Crusades were seriously horrendous from an ethical point of view, I must admit I do like damsons!
Please leave a comment if you can identify exactly what the fruit from my wild-seeded tree might be, if you know a good recipe, or if you have picked some lovely autumn fruit yourself!
Previous related posts
http://www.badwitch.co.uk/2015/06/review-kitchen-witchs-world-of-magical.html
http://www.badwitch.co.uk/2020/08/apple-season-gathering-windfalls-after.html
http://www.badwitch.co.uk/2017/08/mandala-august-harvest-of-apples-and.html
http://www.badwitch.co.uk/2008/08/blackberries-and-brambles.html

Ooo! Lucky you to have a surprise damson tree in your garden. I love this time of year. Lots of stuff to pick!

Yes, I do love foraging, but even better if I can pick things in my own garden!