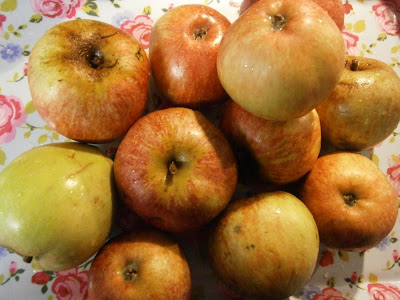 It is apple season, and many of my friends are picking, cooking and preserving fruit. Bad Witch's Blog regular contributor Jane Mortimer wrote to me about six weeks ago saying she was checking out the hedgerows for the developing fruit, and that at the time noted the apple tree on the nearby A road was loaded, but the apples were quite small then. 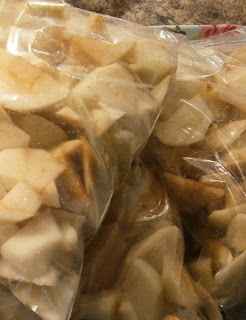 Jane emailed me again earlier this week saying it had blown a gale where she lived. She popped down to the tree the following morning and picked up some windfall apples before the bruises got a grip. She wrote:


"There were loads, and I came home with 18 pounds of them. They ranged in size from 3-4 inches in diameter. There was no way I could keep them all, so I rang a couple of friends who were happy to take two thirds of them off my hands. I've just spent a good hour prepping our share for the freezer, and the pix are attached. It was a bit of a chore, but I managed to keep kitchen magick at the front of my mind as I peeled and sliced. The worms and other iggies in the compost bin have had a feast added to their heap, and we've had four bags of apple added to the freezer to make into pies with this year's foraged blackberries and fruit from the garden. I'm almost looking forward to the cold weather now so we can eat fruit pies and custard - yum!"

My reply was: "Synchronicity - I collected windfall apples and some blackberries last weekend too!"

I love blackberry and apple. I stewed some up and had some of it cold with yoghurt, the rest is in the fridge. I also cooked red cabbage with apple to have with my Sunday dinner and enjoyed a baked apple another day. I was also reminded that a long while ago I gave a talk called A Bad Witch's A-Z, and A was for apples and apple folklore. I'm thinking of doing some more video recordings and using A Bad Witch's A-Z as the theme, starting with A for Apples - and this is the right time of year to do that. Look out for more details soon...