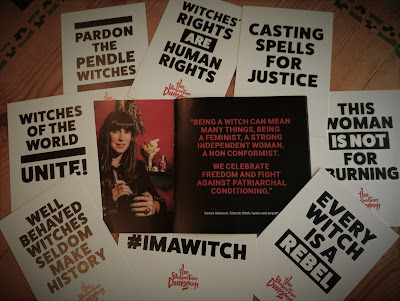 This Halloween the Blackpool Tower Dungeon is retelling the story of the Lancashire Witch Trials of 1612. Ten innocent people were executed for witchcraft, and today we know them as the Pendle Witches. Their names were Anne Whittle, Ann Redfearn, Elizabeth Device, Alice Nutter, Alizon Device, James Device, Katherine Hewitt, Jane Bulcock, John Bulcock and Isobel Robey. You can find out more on the Blackpool Tower Dungeon website.

But rather than merely showing what happened at that dark time in history, the Dungeon is calling to the Government to grant an official pardon for the Pendle Witches and is asking the public to help right the wrongs of history. They've started a petition, which needs as many signatures as possible for the Government to respond.

If you want to do do more, the Blackpool Tower Dungeon is also inviting people to do a little candle magic to help the cause, and to join a social movement to share tales of solidarity using the hashtag #imawitch.

The campaign also highlights that the Pendle Witches weren't alone. As I'm sure anyone who reads my blog knows, the men and women persecuted were among thousands who faced a similar fate. And indeed persecution of people on charges of witchcraft still happens in the world today. The story of witchcraft persecution is often one of prejudice against people who are marginalised in society - women, the elderly, and the poor as well as people with religious or cultural differences to those in power.

Kenny Mew, general manager at the Blackpool Tower Dungeons said: “Today we take a stance against prejudice and give the power back to these inspiring women to tell their stories.”

Although this isn't the first time there have been calls to pardon the Pendle Witches - a brewery got up a petition 9 years ago - I hope this time it is successful.

The picture at the top shows some of the campaign material provided by the Blackpool Tower Dungeon, which included an explanatory booklet and mini placards. I was also sent a very nice Mama Moon candle with which to do some candle magic. I'll be doing that this Halloween - why not do so yourself too at the same time?

Just signed the petition. This is a very important issue. A royal pardon could actually help some of these poor souls move on if they've not been able to.