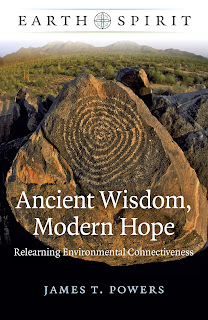 Here's an extract from the book Earth Spirit - Ancient Wisdom, Modern Hope by James T. Powers, which is due to be published by Moon Books this month:

We all know that the Earth and all life on it is in danger. Even those who deny the fact that human actions have created the climate and environmental crisis threatening to overwhelm the planet recognize what is happening. With our sophisticated communication technology, we are privy to the news of catastrophic climate events that take place daily around the world, our nation, and even where we live. Powerful storms, tremendous floods, massive wildfires, extreme droughts, and deadly heatwaves have become the norm. Melting sea ice and glaciers in Greenland and Antarctica threaten coastal cities and communities worldwide as the level of the oceans rise. Forests are disappearing and desertification is spreading. Mass extinctions of plant and animal life is increasing. It is as if we are living in a dystopian future; the problem is that future is now, and it is of our own making.

It is clear the Earth is trying to get our attention yet, as most of us go about our daily lives, it is easier to ignore the frightening warnings than think about them, let alone face them. Like many, I have felt overwhelmed and powerless as the continuing ecological and biological disasters confronting the planet rapidly unfold. A late summer hike to an ancient rock shelter used for thousands of years by the Indigenous people who once inhabited the area where I live changed that.

I am a retired teacher; also an historian, archaeologist, and researcher who’s mind and interests have always dwelled in the past in order to dig deeper into how, who we are as a people, has been shaped by our collective past. Part of that quest has been to study and research the lifeways and beliefs of those who came before us, in the case of this book, the Indigenous people of Southern New England. An important part of that understanding has been to learn how as a culture, they related to the environment not just in a physical manner, for example, how they shaped and used it, but their spiritual connection to it and all aspects of the Living Earth.

This led me to travel back in time to the end of the Ice Age when the first human inhabitants of Connecticut arrived; the Paleo-Indians and the subsequent Archaic and Woodland cultures that thrived for a period of 14,000 years. What made the people of those cultures, despite dramatic environmental changes, so successful? How did they relate to their environment and view their role in it? The archaeological and historical record, modern Indigenous cultures, the growing Spiritual Ecology movement, and my own studies of Indigenous cultural beliefs began to shape answers to those questions. Coupled with my understanding of Celtic, Native American and modern shamanic practices, as well as research into the how our brain shapes the way we see the world and cultures, I was able to piece together an understanding of how the Indigenous people of the past and present were and are able to relate to and consciously live as part of an interconnected world in harmony with the Living Earth.

We can return to an ancient consciousness and perspective that allowed not just Indigenous people in the past, but all of our ancestors, to live in a sustainable, respectful and interdependent manner with all life on the planet. We can begin to heal our relationship with the Earth before it is too late. There is hope and the answer is simple; the wisdom of the past can guide us towards a better future.

You can view Earth Spirit - Ancient Wisdom, Modern Hope on Amazon and also see the author page for James T Powers on the Moon Books website.