Book Extract: Take me to St Roch's - A Ghost Tale 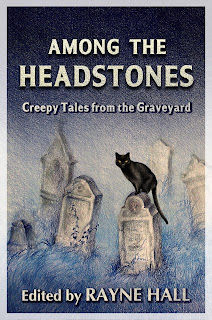 I love a good Gothic tale and here's an extract from the ghost story 'Take me to St Roch's', set in a Sussex cemetery. It's from the book Among the Headstones: Creepy Tales from the Graveyard, edited by Rayne Hall, offering 27 Gothic ghost stories by established writers, classic authors and fresh voices.

The night was silent around the 13th century Norman stone church. Jean unlatched the heavy wooden gate. It creaked on its unoiled hinges. Jean’s feet crunched gravel with every step. Anne moved without a noise.

In the blaze of the headlights the tree stems threw stripes across the ground, black on grey. Tombstones stood as pale pillars.

Anne pointed to her chosen spot.

Jean braced herself and ducked into the darkness of the deep-hanging branches. She hung her gabardine jacket over a crumbling tombstone, and placed her black pumps neatly next to it. Wind brushed her arms and neck, soft but cold. Kneeling, with her skirt tight around her legs, she stabbed the nail file at the earth to break it up. Fortunately weeks of persistent autumn rains had softened the local clay soil. When she pulled out the first tuft of grass, its roots teemed with silvery maggots.

Already, the twin lights from the car were dimming. Moisture seeped through her skirt and tights and chilled her knees. Her scalp itched. Despite the prevailing chill, sweat trickled from her armpits down her sides.

Her fingers groped their way in the cold slippery ground. The smell of fresh earth blended with the odour of dusty museums, of moor and decay. She touched something hard, sucked her breath in and examined the pale sliver. Probably a piece of bone from an earlier burial.

Above, something rustled in the silver-grey leaves. The twigs of the trees beckoned like skeleton fingers, withered and pale.

The church stood high and still, an indifferent observer.

“Would you mind talking?” Jean asked the girl. Even a ghost’s voice was better than the void. “Tell me about what life was like in your day. Please.”

Jean was already burrowing as fast as two bare hands and a nail-file allowed. She clawed and shovelled, shutting her mind to the question about how long it would take to dig a hole big enough to hold an adult body.

Then the light was gone and darkness descended.

The wind died away, and the silence became as suffocating as the darkness. There was no sound now but the thudding of earth on earth, and the occasional rustling of nettles against the fence.

As Jean’s eyes adapted to the darkness, recognising its shades of grey, she could see the gravestones again. They stood erect in rows, large ones and small ones side by side like families in a procession.

Don’t look at what? Jean strained to see. Was it the stones that were moving, or ghosts, approaching slowly, a bold noiseless army?

All further speculation was cut short. Something cracked, the sound of breaking stones, of a tomb bursting into pieces, and white silhouettes emerged everywhere.

“They?” Clutching her nail-file, Jean scanned the surroundings for an escape route. Ghosts were rising everywhere.

“My sweetheart’s family,” the girl stated flatly. “They begrudge me the Christian burial. They don’t want me to lie next to their only son. Hurry up.”

Jean leaped out of the hollow to run.

Proving her point, she curled in the shallow hole. It would just take a few more inches.

Jean dropped to her knees again to burrow in feverish fear. When she looked up, the spectres were looming above, wrapped in white tatters. Many had ugly swellings at the neck, and eczema covered their limbs like purple roses. Smells of cadaver and pus made Jean retch.

“It got them eventually,” Anne said. “Hurry up.”

A one-armed old man limped close, leaning over the grave. Purple nodes dotted his face, black blisters his swollen lips. A lifeless tongue hung out of his mouth, black and tainted with gore. Jean shrank deeper into the grave, where Anne was already cowering in the foetal position, her face buried in her arms.

From above, many inflamed, swollen eyes stared at her. Arms, full of open sores, reached out. Could they infect her with their touch? Had she been digging her own grave?

“Dig,” the girl screamed. Her cold fist hammered Jean’s legs. “They murdered me and my brother! Save me!”

Jean carved and tossed soil with bare fingers. She had to get the girl underground before the other ghosts reached her. Sweat drenched her blouse and blended with the dirt to dark smear.

Another inch down. And another.

Already several pairs of stinking arms reached out from above.

With both hands, Jean heaped earth on the slight form. Then she closed her eyes, and ran right through the cluster of ghosts, feeling their repulsive bodies touch hers, their fingers claw at her clothes. Breathless, she made it to the car.

She slid into the seat, slammed the door shut, shifted the gear to second, turned the key in the ignition. Rrr-rtch. Rrr-rtch.

On the third try, the motor jerked to life. She sped away from St. Roch’s, away from Seelsden, back onto the main road she should never have left.

This is just one of the tales from the book, by Rayne Hall, alongside others by Robert Ellis, Lee Murray, Greg Chapman, Morgan Pryce, Guy de Maupassant, Myk Pilgrim, Zachary Ashford, Amelia Edwards, Nina Wibowo, Krystal Garrett, Tylluan Penry, Ambrose Bierce, Cinderella Lo, Nikki Tait, Arthur Conan Doyle, Priscilla Bettis, Kyla Ward, Edgar Allan Poe, Paul D Dail, Cameron Trost, Pamela Turner, William Meikle and Lord Dunsany.
The ebook is available for pre-order from Amazon at the special offer price of 77p (99 cents in the US) until 31 January. (After that date, the price will go up.)  A paperback will follow.
Posted by Badwitch at 08:00

Thanks for featuring the excerpt from my creepy ghost story. This was one of the first ghost stories I ever wrote, many years ago. I wanted to get the atmosphere exactly right, so I spent a night alone in a remote cemetery on the Kent & Sussex border, and gathered a lot of wonderfully creepy details. I hope readers can feel the authenticity. :-)

What an interesting and spooky story. Perfect for long winter nights with creeping drafts sneaking in from the dark places

While reading the story, it felt for a second that the winter wind outside my window became ever so chilling. Found myself reading faster and faster, needing to know what happens in the end.

Thank you Rayne for a moment of fright!

Rayne, you have definitely got the atmosphere right. I enjoyed reading it again. It's so mysterious, so much fear and suspense, and creates such a dark mood.
Thank you for compiling the anthology, what a great read that will be.

What an eerie, atmospheric story excerpt. Loved it! It's gonna be a great anthology!

What a great story, nicely creepy and atmospheric. Really looking forward to reading the rest of the stories in the anthology.

For a moment, I thought i was left behind. Event the thought of it makes me so uncomfartable and I think this is why we love ghost stories. If this is one of your first stories then I can't wait to read the anthology. Thank you Rayne.

Every ounce of Jean's fright down to her sweaty armpits, became mine.

I salute her courage and stick-ability.

What was the characterization process for this short story like? Did you set out to create a courageous character like Jean or did it just happen?

“Would you mind talking?” Jean asked the girl. Even a ghost’s voice was better than the void. “Tell me about what life was like in your day. Please.”- This has got to be my favorite line from this article! I love how the idea of not being alone in a place of death is still more comforting than anything else. This passage really pulled on my heart strings. Well Done!

Wow, that excerpt is well-written, and the author really captured the thrilling and suspense vibe of the scene. I can feel how Jean is so tense from all the commotion around here. That's the thing about short stories; you'll get to dive into a complete picture in just a short amount of time. The plot in this brief excerpt is so interesting too, makes me want to know more about the girl's past life. This excerpt made me pumped up to see more of the stories on the anthology! Well done!

The balance between the fast pace and detailed descriptions is just perfect, I read it all in one breath! The story is so vivid but never pauses for too long, always moving along and pulling me deeper. But that’s the charm of short stories, isn’t it?
I’m still so excited, even after reading it twice! And really curious about where it all started, what is Anne's story, how they met, and why Jean decided to help her. I’m so intrigued, thank you for sharing, will be waiting for a chance to read it whole.

I am very much looking forward to 'Among the Headstones' release!

What a thrilling story it must be. You surely get my attention with this excerpt. I can easily empathize with Jane. It is funny how she thought it was maybe her grave that she was digging but still kept doing it with determination. That sounds like something I would do.

Wow, I wasn't expecting a short story to give me this much anxiety and tension, but this one really did. I wonder if you had the background of the story in your mind, and left questions unasked for the sake of writing, or if you don't know many of the answers too?