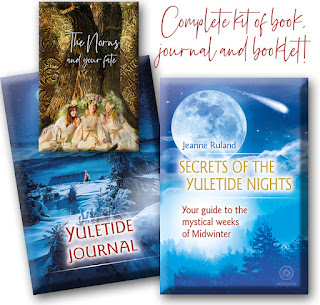 Here's an article by by Ædith Hagenaar and Jeanne Ruland using material from their two books:  Yuletide Journal and Secrets of the Yuletide Nights.

Yuletide is initiated by an eternally repeating natural event: the Winter Solstice on the 21st of December.

On the 21st of December, in the darkest and longest night of the year, the sun reaches its lowest point – the light dies symbolically. An interesting phenomenon now occurs: the sun seems to stay at this lowest point for three days (this is due to the proximity of the earth to the sun, and the speed and rotation of the earth). In the sky the sun resides in the constellation Crux (Cross), however, in the Northern Hemisphere this is only visible south of the Tropic of Cancer. It is not until the 25th of December that the sun rises again and moves visibly northwards – on its way to its highest point. This is when the child of light is born.

Midwinter, which is also called ‘Yulefest’, is a festival of the sun and the earth. It is a time of reflection, of silence, of the consecration and blessing of that which will reveal itself during the new cycle of the year. It is a time of purification and preparation, of looking ahead to what is to come. After the night of the Winter Solstice, the newborn light must be nurtured in the mother’s womb to become strong enough to rise.

In ancient times the winter solstice was a mothernight because the light was thought to be produced in the womb of the Earth or by the great goddess. In the ‘Edda’, a collection of Nordic poetry from the 12th and 13th centuries, we find in the sacred night (from 24 to 25 December): ‘a daughter is borne by the radiant goddess, before the wolf strangles her.’

The period directly after the solstice was also called ‘wolf moon’ because legend has it that the ‘wolf’ had tried to devour the sun. For example, it was assumed that the sun – symbol of the new light, which can easily be covered up and devoured by past events – should be cherished. The rebirth of light has already taken place, but the coldest and hardest time of winter is still ahead of us.

The winter solstice is celebrated to remind us that the darkness that lies ahead has already lost the battle. This gives us courage, strength, and hope to face the time ahead with confidence. On the 21st of December the sun will arrive in the sign of Capricorn, giving us steadfastness and perseverance in our own ascent upwards.

The Yuletide nights are the nights between the years, no-man’s time, the time of transition and mysticism. The sun, Mother Earth, even us humans, seem enchanted. The word Yule, Jule or Joel has its origin in Germanic (jehwl), from Indo-European (jek), and means spell, incantation or enchantment. Thus, Yule nights are “enchanted nights”. With the exercises and rituals in this workbook, you have a tool to invite that enchantment into your own life and use it for the better.

Yuletide is a mysterious and mystical time in which all portals to other dimensions are open. These extend from the human and physical realm, the realm of the dead, the realm of spirit creatures, the realm of the angels, up to the cosmic realms. A stream of blessings descends on the earth. Renewal and healing is possible at all levels. What makes Yuletide so special has nothing to do with religious rituals and customs, and everything to do with it being a cosmic event, a natural event that repeats itself year after year, regardless of fashion or spiritual trends.

Throughout history, this special time has had many names and has been celebrated in many ways. But the essence of these sacred nights – the eternally blessing light, the gauging and (re)negotiation, and the gate to renewal – has remained the same. We live in a time of change. Many things find their way back to their origin. Circles close. There are more opportunities than ever to shape the celebration of this sacred time. Those who consciously experience these nights can favorably influence the course of the coming year and thus lead a fulfilled life that is in accordance with their higher nature. That is why I would like to present to you a number of traditions, customs, ancient and new ways that will inspire you to consciously and actively celebrate this magical time.

In addition to the rituals and customs in the Yuletide nights, the days during Yuletide have a special predictive value. These days are called Wicke days. The word ‘wicken’ is associated with the word ‘dowsing’, and means divination or prediction – the words witch and wicked stem from it. Each day represents a month – what happens that day has predictive value for that month.

By consciously practising the rituals and customs during the Yule nights and Wicke days, you create a powerful energetic framework to close off the old, and shape the new year. You generate an energetic grid or field, and every practice and every ritual adds pure, intentional energy to it. Each Yuletide night builds on the previous one and in this way you recharge your personal blueprint for the coming year.

This is a sacred process – give yourself the space and safety to immerse yourself in it. Know that the more honest you are with yourself, the better the results will be. During all practices and rituals, keep yourself in a field of warmth and appreciation, and be gentle to yourself. This is your own process, in which nothing has to be done – you are free to spend as much and as little time and space on it as feels right to you.

Secrets of the Yuletide Nights was written as an aid to Yule and Wicke practices. In the book you will discover old, matriarchal traditions, customs, stories and spells, that in this modern age can help you feel awake, meaningful and fulfilled. This is complemented by practical tips and exercises to help you make each Yule night enchanting and sacred, and prepare vibrationally for the New Year.

You can find the details here: https://www.palaysia.com/yulenights/