That video is my attempt at a Wassail Cup, or Vessel Cup, Christmas Doll. I love all folklore related to dolls and learnt about this curious custom in The English Year by Steve Roud.
He explained that in past centuries, girls or women would go around houses before Christmas displaying a doll in a decorated box or bowl, singing a wassail song. It was called a Vessel Cup, but that's probably a corruption of wassail, which I've blogged about earlier. The doll would be decorated with evergreens among other things and then covered with a cloth. The carriers asked people if they wanted to see inside, and only reveal the doll if they said yes. Sometimes people would have to pay a coin or two for the privilege. 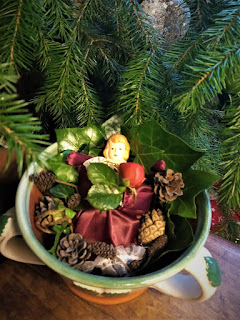 My doll is in the Wassail bowl I found in a charity shop. She's a vintage tree angel, although only about 40 years old and made of plastic rather than anything antique. To decorate her, I went into the garden and picked ivy. I couldn't find any holly with berries on it - or mistletoe - but I did find a tiny rosebud that had remained undamaged despite the morning frost. I picked that to put in her hands.
I think this might be the start of a Yuletide tradition in which I decorate a Wassail Cup Doll every year, and photograph or video her for the blog. If you prefer to see a regular photo of this year's effort rather than the video, I took one of them too and you can see it to the right.
Doing a web search for more information about Christmas dolls, I found quite a bit on the blog In Search of Traditional Customs and Ceremonies: https://traditionalcustomsandceremonies.wordpress.com/2015/12/31/custom-demised-the-vessel-or-wassail-cup/
National Geographic also some information about Nisse Dolls, a Scandinavian traditional of decorating dolls that look like gnomes with red hats: https://www.nationalgeographic.co.uk/family/2020/12/seven-symbols-that-say-christmas-around-the-world
You can find out more about other dolls traditions in my book Pagan Portals - Poppets and Magical Dolls.
Posted by Badwitch at 08:00

Hmmm... it would be nice if the fairy or angel on top of people's trees could be taken out to meet the neighbours too! Wrapped up warm in a nice Wassail cup of course! Let's hope you've started something, Lucya. It'll make a pleasant change from kids knocking on the door with "We wISHoo a merry Christmas..." and nowt else. Come to think of it, we haven't had any carol singers for a few years now. I guess they're too busy interacting with their devices. :(

Thank you Jane. My wassail doll is just under my tree this year. Hopefully in years to come there will be more socialising with the neighbours!

I have a number of Nisse in my house and on Christmas Eve I leave them a bowl of porridge with butter and a shot of whiskey. Have done so for years. Good Yule to you!