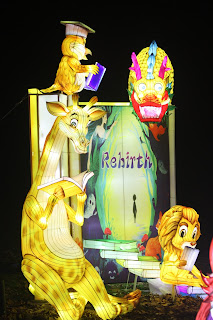 I love the idea of the Icelandic tradition of giving books to friends and family on Christmas Eve so they can start reading them that night. It's called jolabokaflod, and apparently started during WWII but continues to this day.

For a few years I've done something similar with my husband. When present shopping in early December, the last shop we go to is a bookstore. We buy each other an early Yuletide gift of fiction, then go to a coffee shop and start reading. Last year lockdown meant we ordered books online, and the coffee was made at home, but the reading tradition continued. I hope it does so for many years.

The photo to the left is one I took at Lightopia. The illumination portrays the idea of being reborn through engaging with the worlds you encounter inside wonderful stories.

If you want to give a loved one the gift of a beautiful book this festive season, here are a few suggestions in the Gothic, Witch Lit and fantasy genres, including something for children:

The women of Sueño, New Mexico don’t know how to live a life without sorrows. That’s La Llorona’s doing. She roams the waterways looking for the next generation of girls to baptize, filling them with more tears than any woman should have to hold. And there’s not much they can do about the Weeping Woman except to avoid walking along the riverbank at night and to try to keep their sadness in check. That’s what attracts her to them: the pain and heartache that gets passed down from one generation of women to the next.

Mercy knows this, probably better than anyone. She lost her best friend to La Llorona and almost found a watery grave herself. But she survived. Only she didn’t come back quite right and she knows La Llorona won’t be satisfied until she drags the one soul that got away back to the bottom of the river.

In a battle for her life, Mercy fights to break the chains of generational trauma and reclaim her soul free from ancestral hauntings by turning to the only things that she knows can save her: plant medicine, pulp books, and the promise of a love so strong not even La Llorona can stop it from happening. What unfolds is a stunning tale of one woman’s journey into magic, healing, and rebirth.

You can find copies here: mybook.to/weepwomanweep

Liz just wants a happy birthday. Is that too much to ask? A beautiful antique bed: her birthday present to herself. The nice delivery men set it up in her bedroom, and then all Hell breaks loose. Literally. Her family is the usual pain in the you-know-where, and her boyfriend starts asking difficult questions, all on her birthday. But the ghost of her new bed’s former owner is the biggest problem of all. When it turns out he’s not basking in the glow of a happy afterlife, Liz must face some nasty adversaries to help him. Why on earth would she risk her life and her sanity to help a ghost? Certainly not because she’s in love with him. Certainly not.

Laura's website has links to 12 different places to buy it: https://www.lauraperryauthor.com/the-bed

What’s it about? Well, Erica is a normal mum  just making her way through life as best she can. She sees faces in her bathroom floor. Fortunately she knows the witch who runs a local shop who is a bit abrupt but helpful. Sometimes people are not who they seem. Erica goes on a wild ride of discovery – not only are her ancestors witches, but she is also. This isn’t a wand-blazing, fingers sparking kind of witchcraft – it’s much more true to  life, though with a flourish towards the end.

In a tale that crosses generations, Erica, an unknowing witch, meets the spirits of those who have gone before – on her bathroom floor. Their lives are revealed as Erica walks by their side through love, hate and war. Between the school run, a demanding mum and a rocky relationship with husband David, will she unravel the secrets from the past in time to save her future?

The book is available on Amazon as e-book and paperback; also available via Kindle Unlimited: https://www.amazon.co.uk/dp/B08X3QGQ6F 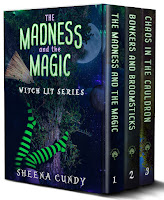 This is a series of three books about the chaotic world of wacky witch, Minerva, and her crazy antics to snare the local guitar-playing vicar, while under the influence of brandy, tarot cards, and the (hormonal) horrors of the dreaded meno-whats-it disease. It is a mad and magical romantic comedy.

You can find out more at Sheena's website: www.sheenacundy.com

Linnea and Lars are twins. They live in a cottage in the forest in Sweden and they have many friends in the same location. In the forest surrounding their house, there are many big rocks and boulders, covered in moss and lichen. One of those rocks is really a bear in disguise. On certain days, so called Green Days, The Green Bear awakens and takes local children on nocturnal adventures while their parents sleep. Those adventures include a trip up the Milky Way, a visit to the enchanted realm of the Animal Mothers and a lesson in Magic from the local Forest Witch. 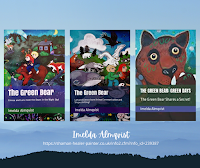 In book #1 Lars and Linnea learn about the night sky in in the Northern Hemisphere and key constellations that circle around the Pole Star. In book #2 they learn that Animal Mothers watch over their animal children in our world and they watch over human children too. They learn the ancient arts of animal communication and shape-shifting. The Green Bear always drops them off at home only minutes before their parents wake up and a regular school day starts.

These books focus on keeping the magic alive and children forging a deep and lasting soul connection with all life forms, the Earth and the Cosmos.

Imelda works with children and families in her shamanic healing practice and I believes that the future of our planet depends on our children developing a completely different relationship with the Earth and all non-human beings we share our beautiful planet with. She is running a special offer this month: new subscribers to her newsletter get to download one (bonus) Green Bear book for free, you can find the link to join and get the book here: https://dl.bookfunnel.com/pmz0jfeqt1.