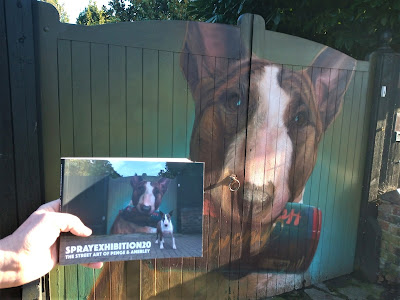 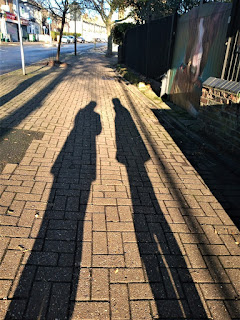 I've watched my part of London transformed from a sleepy suburb hardly anyone had heard of into a vibrant community full of street art in less than a decade. Here's a review of a book that celebrates this: SprayExhibition20 - The Street Art of Penge and Anerley.

The book's both a wonderful catalogue of colour pictures showing some of the murals on walls, gates, shop window shutters and other urban spaces, and a history of the group of artists responsible for turning SE20 into an open-air gallery. The group originally launched a blog called London Calling, about street art in the capital. They then decided that as well as documenting things in places like Shoreditch, Camden and Hackney, they would bring that creativity closer to where they were based.

All of the art is done with permission, but at first Penge and Anerley property owners were reticent about letting their shops, houses or garages be used as canvasses for pictures. A few agreed, and others were so impressed by the quality of what they saw that more and more people offered sites for beautification. There are now hundreds of pieces of street art all over the area. Tours take place. A recent one took over 6 hours but still didn't manage to cover all the works in the area. Penge's street art has even been on BBC news.

I know street art isn't everyone's taste, but I love it. It's part of the magic of the urban landscape. While sites of natural beauty out in the countryside should be left as undisturbed as possible by human activity, I feel the opposite is true in manmade environments. Cities are where people mostly live and work, but can feel drab, overly corporate, or even a bit scary. Street art of the type in Penge is a form of transformative enchantment. It not only makes towns prettier and seem friendlier, it also shows the power of ordinary people to make positive changes in and around the places they live. 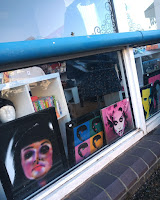 I took the photos on this post yesterday on a daily walk around Penge with my husband, John. The one at the top shows the cover of the book next to the mural depicted on it, which is by Irony. The dog is called Molly and is owned by one of Penge's most influential artists. The next photo shows our shadows along the street near the painting. I thought it looked quite artistic in its own right.

On the way home we passed a charity shop with yet more handmade pictures in the window - another example of how Penge is becoming an artier place all the time.

You can find out more about the street art in Penge here: https://londoncallingblog.net/2017/05/01/a-street-art-guide-to-penge/

With so many shops turning into fast food outlets, nail bars etc, window shopping is becoming a thing of the past. So maybe street art is going to be the thing to go out and look at. I'd be happy to see more of it in shabby downtown Romford!

Sad that window shopping isn't what it used to be, but the art on the shop shutters is definitely worth going for a walk to look at