Fiction: The Witch - A Short Story by Lucya Starza 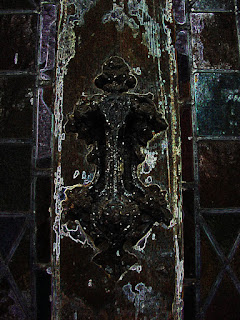 I won a runner's up prize when I entered this short story for a competition. Hope you enjoy it:

She was a witch. That was what they said. She certainly looked the part: warts and all, old, with a face like a shrunken walnut and hair like a sooty city bird’s nest. They said she muttered curses. You could hear her if you got too close as she stooped along on her nobbled cane to the corner shop, on those few occasions she left her house.

Although in London, or at least near as damn it, her house was ancient and hidden in a garden so overgrown that to walk its path felt like venturing into a dark wood from a grim tale. Sometimes children egged each other on to knock, calling each other chicken. But they didn’t want to still be there when she opened the door. If she looked at you, you were done for, they whispered.

“What does she do?” one youngster asked, when the tale was told by another in a group, in a hushed huddle. They looked at each other, waiting for the oldest, the ringleader, to tell them what they wanted to hear.

“She asks you inside,” she said at last, “and you do what she says, because you can’t help it. Because her eyes grab you and she promises stuff and you can’t say no. Because she really is a witch.”

The children shuddered, but bored in the long summer they dared each other to try. The idea grew from a mere spark of a suggestion to something burning so brightly it outshone the lure of sunshine in the park or any of the other places they might have spent that morning. They fished for the fear in each other’s faces, and thought they caught it in the smallest of their gang. They looked down at her round eyes in a grubby face, her tousled hair, standing in scuffed shoes but wearing her bestest, brightest, favourite dress. They smiled and she knew she was caught.

“You do it. You go up the path and knock. Call her a witch, then run!”

“We’ll be behind you, watching, from the other side of the hedge,” so the others promised.

So she went, in her bright dress and scuffed shoes, wanting at once to please and appease and look bigger than her years. Wrought iron squealed in rusty hinges as the she pushed open the aged gate with her small hand, but there were no signs the witch had heard or seen. The path wandered through the overgrown garden to a round-topped wooden porchway at the entrance to the house. Its once-white paintwork was browned with age, broken and and rotten looking. Shards hung down from the top like broken teeth in a yawning mouth. You could just make out the closed front door, a faded umber, within its shadows. On the face of the house the dull and dusty windows remained still like sleeping eyelids.

The others didn’t follow the littlest along the crooked path overhung with branches. They stayed behind the high hedge, glimpsing through it barely. A nervous giggle from one was quickly stifled by a turn and a glare from another. In the garden all was silent except scuffed shoes padding over the cracked slabs.

The child walked on towards the house, slowly but steadily. The others watched when daring to peek, seeing just the back of that bright dress and tousled hair as she crept further along the pathway and reached the porch. There was a single stone step there, and she climbed it, stopping only in front of the door. They could see her dress bright even in the shadows. She had to stretch to reach the knocker, lift it and let it thud. The hollow sound must have been heard inside, they thought.

Those lingering behind the hedge sunk down low as they heard it, but needing to know what was happening, peeked again. The door hadn’t opened, yet, but the girl in the bright dress was still standing there, her back towards them, facing the door, as if stuck to the spot.

“Run!” one called, hoarsely, but then saw the door start to open and ducked fast. They hunkered there, the crowd of them, trying to be small, hoping they hadn’t been heard or seen. The wait was long, not daring to look or speak, at least for a while, just listening for the youngest one running – or the witch coming down the path to find them... Then, faintly, they heard the sound of a door closing. One looked, then the others, but the littlest one was nowhere to be seen.

Inside the house, the old woman smiled at the young girl.

“They think I’m a witch, don’t they?” the old woman asked.

“Yes, auntie, they do,” the little girl said with a sad frown, “but I know you aren’t.”

“Do you think they’re still out there, waiting for you?”

“I hope not,” said the little girl. “I think they’ll run away soon.”

They had, but the tales they told of that summer morning grew with the telling.

Loved it, Lucya! Hoping it's just the start. Those little devils who think the wee one's aunt is a witch need some pranking by the aforesaid characters.

Thanks for the lovely comments. I do hope to write more short stories!