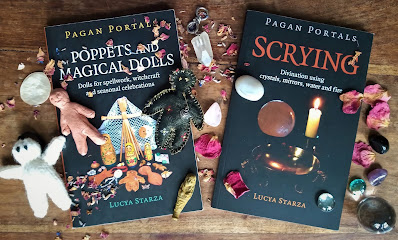 I'm celebrating success as two of my books have broken through sales milestones. My publisher Moon Books has told me that Pagan Portals - Scrying, which was launched this spring, has now sold more than 1,000 copies. Pagan Portals - Poppets and Magical Dolls has also reached a milestone, having now sold more than 3,000 copies! A big thanks to everyone who has bought either of the books, left reviews, and told me that they've enjoyed reading it.

Scrying is the art of divination using things like crystal balls, dark mirrors, water and fire. Poppets are magical dolls used to represent people in spells of all kinds - for help and healing as well as sometimes for traditional cursing. It's a term used in English magic since the middle ages.