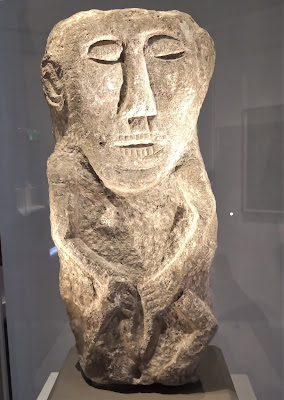 A friend asked me what goddesses from Britain and Ireland are on display at Feminine Power at the British Museum. With that in mind I photographed this Sheela-na-gig when I went around the exhibition again last weekend. This large stone statue was originally from Ireland and dates to 1100 - 1200. The label belowt it display reads:

"Sheela-na-gigs are stone carvings of female figures prominently displaying their vulvas. Adorning churches and secular buildings across Ireland, Britain, France and Spain from the 1100s, they hae sometimes been seen as Christian warnings against lust, but their meaning is debated. They have also been interpreted as symbols of fertility and regeneration with their typically bald heads and emaciated bodies evoking death and their vulvas representing birth and life."

I was at the British Museum with Laura Daligan to teach a goddess workshop for a lovely community group. In a strange coincidence, when we first entered the workshop room to set up the space, a table we were allocated had a small piece of red paper already on it, with a single word: "vulva".  No one had any idea why it was there, but of course we made use of it on our altar along with goddess statues, Divine Feminine Oracle cards and LED candles (there was no way we could use real candles sadly).

I'll be blogging more about other items in the exhibition in the fture, including writing about other works of art with connections to Britain. However, one of the things I really love about Feminine Power is that it displays goddesses from all over the world, showing a wealth of examples of ways women have been seen as powerful and important in many different cultures. I blogged about a Luban divination bowl earlier this month.