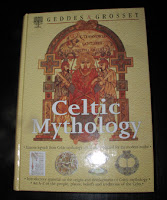 I woke up this morning eager to get on with my plans for 2008. Or, at least, worried that if I didn't make a start soon I never would.

There is something of a mystery behind how I got my copy.

One cold and windy January morning this time last year while I was walking along a deserted beach in East Sussex I saw a book sticking out of the shingle. Naturally, I picked it up. I found that it was a hardback edition of Geddes & Grosset's Celtic Mythology - in perfect condition apart from a slightly creased and muddied corner where it had stuck in the beach.

The logical, and most likely, explanations for it being there is that some other walker had dropped it, but I could see no one around to try to return it to. The fanciful side of me likes to imagine that the book was there by some strange magical circumstance and that I was meant to find it. And, presumably, read it.

A year later, I'm about to start.

Before I do, here are my first impressions. It is lengthy - 480 pages - and doesn't have many pictures. This is definitely not a coffee table book.

I found a reader's review on the Amazon website, which says it is heavily based on an early 20th Century text by Charles Squire and so is a bit outdated.

It definitely looks heavy going, but I am sure I will learn plenty of interesting and useful stuff when I get on with reading it. I plan to make a start today.

is available through Amazon.
Posted by Badwitch at 10:16

Oh you HAVE to read it - it was meant for you to find. Serendipity tells me that you will find something of use in it...