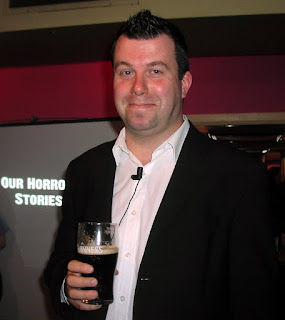 Yesterday evening I went to hear Steve Parsons and Ciaran O'Keeffe, from Living TV's Most Haunted, do a talk called How NOT to Investigate the Paranormal.

The event was hosted by The Skeptics in the Pub, a group that meets in the Penderel's Oak pub in High Holborn, London, to analyse topical subjects with a critical eye.

Let's face it, Most Haunted is hardly difficult to debunk. Even those of us who believe in ghosts - and I count myself in that number - can hardly accept that all the spooky stuff portrayed on the TV show is for real.

I didn't need the two parapsychologists to confirm that most of the so-called psychic impressions given by medium Derek Acorah were based on prior knowledge. I also didn't need to be told the noises, lights and gusts of wind that have Yvette Fielding screaming that there's a ghost in the room are really just normal phenomena. I knew that already.

Nevertheless, the behind-the-scenes anecdotes were fascinating, such as explanations of verbal techniques used by the show's psychics to pump people for information before filming starts and practical jokes played on team members to set them up with fake information.

They also had a few cautionary tales. Since programmes such as Most Haunted have become popular, the number of people believing their homes are haunted has soared. Some get ripped off for vast sums of money by unscrupulous people who claim they can exorcise the property.

Ciaran said: "If you ever think you have a ghost, you don't want an exorcist, you want a skeptic. Nothing ever happens when a skeptic is around."

There's an Irony in this, Steve Parsons and Ciaran O'Keefe made a tidy pile of cash from Most Haunted and their consciences didn't bother them at the time. Now they're STILL making a pile of cash from the show by rubbishing it - but when Steve Parsons is advertising his expensive ghost hunting nights you can be sure that he still mentions the Most Haunted brand name!! It's a very nice little earner for him, but it still makes him a hypocrite.

Yes, that is ironic, I agree. Still, it was an entertaining talk.

U obviously dont know Steve as everythn he makes money wise goes back into funding for serious research into the paranormal! He dosnt live a glamerous life or activly seek fame or fortune! His life is studyin the paranormal! The evening is very entertainin and u learn alot about how to research the paranormal propply so dont keep tryin to discredit people who r tryin to make this field a descent one as there r so many bad groups out there!

It is great to know Steve puts all of his money into paranormal research. Thanks for saying that. His talk at the Skeptics Club in the summer was a very entertaining and informative evening. It also seems to have provoked discussion - which is good.