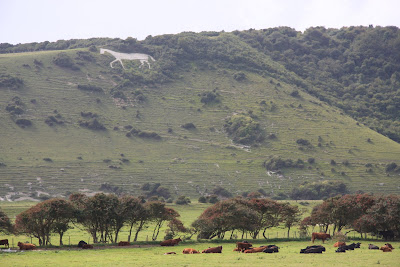 The English have a reputation for being fond of animals, particularly horses, but our longstanding fascination for creating giant images of white horses on hillsides poses a mystery. There were at one time about 24 of these figures on hills in the British Isles, although many have been lost from view. The rest of the world only has five.

The one in the picture above is a modern horse, in Litlington, Sussex. It was cut in the mid 1920s to replace a horse created in 1838 to mark the coronation of Queen Victoria, but which had become overgrown.

The oldest white horse in Britain is the Uffington horse, on the Berkshire Downs in Oxfordshire. Archaeologists believe it was created between 1200 BC and 800 BC in the late Bronze Age. Coins from the same period show the same image, which is thought to be a horse goddess connected with the local Belgae tribe, possibly the Epona,who was widely worshipped at that time.

White horses throughout Britain are cut into chalk, and have to be cleaned regularly to prevent them becoming overgrown and lost. This requires considerable work and dedication. That the Uffington horse, which is nearly as old as the pyramids, has been kept clear for thousands of years and new white horses are still being cut, shows just how important these figures are to us as a nation. Whether that significance is spiritual, artistic and simply shows a time-honoured love of horses, no one can really say.

So glad to hear sites like the Uffington horse are being preserved--and honored with modern creations.

I've only ever been to London and Salisbury so I wasn't aware of the white horse phenomenon.

I love that photograph. I noticed you're following my photo blog so I thought I'd pop in for a visit.

I'm not a neo-pagan, really. I don't practice it but I believe I am a pagan by instinct.

Hello Pagan Sphinx, glad you like my white horse picture. I love taking photographs - I also really like the photos on your blog, which is why I am following it.