Vultures and Crows: A Pentagram Game 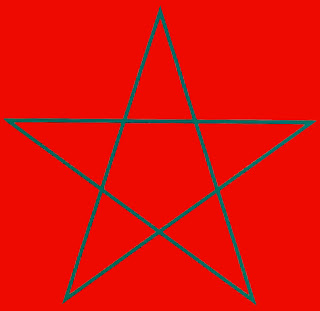 Games are traditional pastimes over the twelve days of yule.

Vultures and Crows is an old game that I feel seems particularly witchy because it is played on a board drawn as a pentagram.

One player has one counter as the 'vulture' and the other player has seven counters as 'crows'. The object is for the vulture to kill four crows, or for the crows to capture the vulture.

The first player places a crow on any of the ten points on the board. The second player then places the vulture on another point. A second crow is placed on a third point and then the vulture moves to an adjacent point.

The vulture kills by a short leap over crow, but cannot take more than one each turn. The crows cannot move until all seven are placed, then a crow can move to an adjacent point each turn.

If three or more crows immobilise the vulture they win. The vulture is trapped if it cannot move, but if the vulture kills four crows they are considered too weak to win.

This game appears in Pentagames

, a collection of classic games designed by pentagram, published by Books UK Ltd.
Posted by Badwitch at 08:01