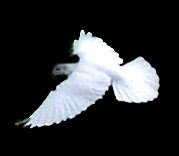 This weekend is The Big Garden Birdwatch - the world's biggest annual bird survey - and everyone, all over the world, can take part.

People are being asked to watch birds in their garden or local park for just one hour over January 24 and 25 and record the highest number of any one type they see. You can record the results by logging onto http://www.rspb.org.uk/birdwatch/index.asp.

The same website also has more information about the event, which is organised by the RSPB, and has pictures to help you identify birds you might see.

While you are doing that, you might want to try out a bit of ornithomancy - that's divination by observing the behaviour of birds.

This form of fortune telling was particularly popular in ancient Greece and Rome, but has been used by many other cultures throughout history. In Homer's epic the Odyssey, an eagle appears three times, each time flying to the right, gripping a dead dove in its talons. This augury was interpreted as meaning Odysseus was returning home and would deal with his wife's suitors.

Ancient Romans put great store on ornithomancy, and the priests who practiced it were extremely well regarded.

According to Divination for Beginners, by Scott Cunningham, Roman bird diviners would stand on a hill then, with a stick, indicate an area of sky in which omens were to appear. He would pour a libation of wine and offer a prayer to Jupiter "that there be signs within the boundaries I have prescribed".

Ornithomancy was seen as a complex subject to Romans, with types of birds, flight patterns, songs and behaviour adding layers of meaning. But here are a few basic ways of divining the future with the help of our avian friends.

In general, birds seen on the right bode well, but birds on the left are an ill omen. Four birds flying from left to right is the most auspicious sign.

Here is a short list of birds and what they mean:

Blackbird: A fortunate omen
Crow: Usually a bad omen, but if it cries three times it is favourable
Dove (or white pigeon): Highly fortunate, indicating peace, love and happiness
Duck: A sign of a stable relationship
Eagle: Not a common city bird, but one of the most important birds for omens. Usually indicates misfortune, but can represent power and strength and the matters of empires and leaders
Gull: You may soon travel
Magpie: Good or ill fortune depending on the number seen, as in the rhyme "One for sorrow, two for joy, three for a girl, four for a boy"
Robin: A sign of good fortune
Sparrow: Means domestic tranquility
Wren: The luckiest of birds, seeing a wren means good fortune will definitely come your way

Be Guided by the Birds and the Spiritual Messages They Bring

I think we've seen all of these in our garden, with the exception of the duck. I guess that means we live in interesting times... which is accurate enough.

I'm impressed you've seen an eagle in your garden. I've actually seen a pair of ducks in my front garden. I woke up one morning and looked out of my window to see the ducks sitting in the middle of the road. After several cars swerved to avoid them, they waddled into my front garden. I think they must have come from the Crystal Palace Park.

In all fairness, I think it was really a red kite. But we've also seen a sparrowhawk and a buzzard!

LOL
From the caribbean...

How lovely to be in the Caribbean! Lucky you!

Dear Badwitch,
I know nothing about witchcraft, but I appreciated your information on
ornithomancy. The problem is, I live on a farm in Latrobe Valley, Victoria, Australia, and the birdlife is so abundant (wedge tailed eagles, ducks, brown falcons, sparrows, parrots, quail, and most of all Magpies, that it really depends on which direction you look! Love your page and will visit regularly, Take care, Rod.

Rod, your farm sounds wonderful! I hope all of those birds are bringing you lots of luck - or at least giving you a lovely day!

Dear Badwitch,
I recently had an ornithological experience which I suspect would have caused a ancient Roman great excitement. Not being a Roman, I am at a loss to know what to make of it. I had visited the Guards Chapel in Birdcage Walk to admire the memorial window to the late Captain Robert Nairac (Grenadier Guards: he was abducted and murdered by the IRA in 1977). This includes a picture of a falcon on a gauntleted hand: Nairac was a keen amateur falconer. Emerging into St James's Park, I saw a male sparrow-hawk bring down a starling on the grass and start plucking it while still alive. This is a sadistic habit that sparrow-hawks share with their larger cousins the goshawks. The sparrow-hawk suddenly looked up and saw me standing about five feet away. Hawk and starling each gave a squawk of alarm and flew off in opposite directions. So I had saved the starling. Last Saturday I stopped off for tea at a country house hotel in Lincolnshire on a whim and by chance. There was a display of falconry taking place in the grounds. Someone, Roman or other, is clearly trying to tell me something? Alistair