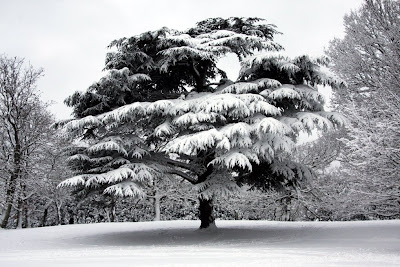 According to Are You Superstitious?, by Lore Cowan, dreaming of snow means that happy news is on the way, but the amount of snow that has fallen over London in the past 48 hours is hardly good news for everyone. It is a bitter winter for those without shelter or proper heating and is particularly tough on the old and frail. Those who had to get in to work yesterday had a particularly tough journey, with buses and trains cancelled.

Yet there is something about times of difficulty and hardship that seems to bring out the best in Londoners. While returning from the park yesterday morning, after taking photographs, one passerby told me, with a smile on her face, that she had walked two miles to get to work and wasn't quite there yet. I've seen men with shovels offering to clear their neighbour's paths and helping people dig their cars out of snowdrifts.

Adversity is not always a bad thing - and if old sayings are to be believed, snow falling now might indeed be good news for the future. According to folklore, much snow in February means a fine summer. One saying goes:

Candlemas Day, or Imbolc, fell on February 2. We certainly had far worse weather than cloud or rain then, and I'm not completely convinced winter is over yet.

Another old saying is "Year of snow, fruit will grow", so perhaps the freezing weather now does mean good things for the year ahead.

if you cut a apple in half it has a pentagram style shape in the middle.

It does indeed. I have a lovely apple tree in my garden and have written quite a bit about apple folklore on my blog. Click on the apples tag in the list.